Barclays Center, Brooklyn, New York– In the main event of Showtime’s quadruple-header at the Barclays Center, Danny Garcia (25-0, 16 KOs) beat Erik Morales (52-9, 36 KOs) in more convincing fashion than he did this past March, scoring a fourth round knockout of the 4-division former world champ.

Following 48 hours of controversy and conflicting reports about Morales’ failed pre-fight USADA drug test, everything was finally settled late Friday night and the bout was kept at the top of the four fight televised card. 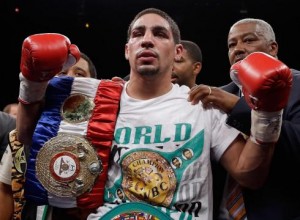 Morales, though, never really showed up.

Looking flat and flabby, the 36-year-old Morales had very little to offer against the 24-year-old defending WBA and WBC junior welterweight champion, Garcia. Count, maybe, one or two solid shots from Morales as the only highlights of the Mexican legend’s performance. The rest of the bout was all Garcia until the very end.

At the end of the third round, Morales appeared to have hurt his ankle after taking a shot from Garcia. He wouldn’t have to suffer long as a stiff-walking Morales would be completely corkscrewed into the canvas the following round by a picture-perfect left hook from Garcia. Morales went down hard, bounced a bit off the bottom rope, and appeared to want to get up, but there really was no point in letting the fight go on.

With the win, Garcia reaffirms his spot atop the stacked junior welterweight division and possibly sets up a title defense against Argentina’s Lucas Matthysse.

The 23-year-old Mexican, who lost his ability to win the title due to an inability to make the welterweight limit, was competitive throughout the contest and even managed to drop Malignaggi in the eleventh round.

Malignaggi was Malignnagi, using his edge in speed to avoid Cano’s biggest shots and connect with enough of his own to take his share of rounds. Cano was cut over the left eye early on in the contest, but it was more likely due to Cano’s own paper-like skin rather than the power of the WBA titlist.

Quillin would score six knockdowns in the contest (two in the fourth round, two in the sixth, and two in the twelfth), mostly with the left hook, but, amazingly, the fight wasn’t a blowout. N’Jikam performed well, winning many of the non-knockdown rounds and boxing solidly throughout.

Ultimately, though, six knockdowns are six knockdowns and they were enough to carry Quillin to the unanimous decision, getting the 115-107 score from all three judges. The Boxing Tribune also scored the bout 115-107.

In the opening bout of the telecast, Devon Alexander (24-1, 13 KOs) took the IBF welterweight title from Randall Bailey (43-8, 37 KOs) in a mind-numbingly dull twelve rounds of nothingness. Alexander fought as if Bailey were made of angry bees and showed no intention of even trying to do anything offensive.

The one highlight came after the bout when a mostly papered Barclays Center booed the new champ mercilessly, proving that even a free ticket isn’t enough to buy a real fan’s silence.