At 16 years of age, Hernan Marquez became a father. The 500 pesos he earned a month from the Mexican Olympic Committee for being National Amateur Champ and the few pesos he made as a baker’s assistant in his native Empalme, Sonora weren’t going to be enough to pay the bills. The young southpaw with dreams of Olympic gold was then left with the task of convincing his mother to sign a permission slip allowing the underage “Tysoncito” to make his professional debut. 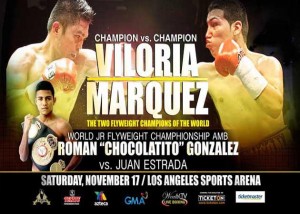 Marquez would make his successful debut in October of 2005 against 0-18-1 Noe Acosta in a converted party hall for the enjoyment of a few dozen spectators. The 300 pesos he made for the fight were long spent before his hands fully healed, but the teenage fighter knew he was on to something.

For the next several years, the heavy-handed battler worked his way through the Mexican club circuit, earning a reputation as a legitimate knockout artist and becoming a regional draw on the verge of a national breakthrough.

A 2010 loss to Filipino contender, Richie Mepranum, on the Sam Peter-Nagy Aguilera undercard in Texas would then lead to a call from Nonito Donaire’s people.

In Marquez, Donaire’s people saw a solid record, a solid reputation, and enough of a lack of experience to make for a nice risk-reward ratio in making the fight.

Despite a significant size disparity, likely around three weight classes by fight time, Marquez accounted fairly well for himself in his TKO 8 loss.

From there, Marquez moved ahead and eventually got a shot at WBA flyweight champ, Luis Concepcion, in Concepcion’s native Panama. The eleven round war was full of blazing action and, had it been at a higher weight and on American TV, would surely have garnered 2011Fight of the Year consideration. At the end of the battle, Marquez would be the new champ and, at 22 years of age, his dreams had become reality.

Since then, Marquez (34-2, 25 KOs) has defended his title twice and has also fought two non-title bouts. This Saturday, he faces WBO flyweight titlist, Brian Viloria (31-3, 18 KOs) in the most important fight of his young career– A unification of the WBO and WBA titles and, more importantly, a battle for the undisputed no. 1 spot in the 112 lb. division.

“Hawaiian Punch,” Brian Viloria has had a much different path to unification than his rival.

A month before Hernan Marquez made his professional debut, the Filipino-American, Viloria had knocked out Eric Ortiz to become WBC junior flyweight champ.

The victory appeared to be mere fulfillment of destiny as the highly-decorated amateur with the 230-8 record, was considered to be a world champion in the making ever since he began winning local and regional tournaments in his native Hawaii.

However, just eleven months after his title-winning effort, Viloria’s career entered into a three-year black hole from which few thought it would emerge.

After losing his title to Omar Niño Romero in his second defense, a rematch with Romero would be changed from a draw to a no contest after his Mexican opponent tested positive for a banned substance. After that, Viloria would lose a close, majority decision to Edgar Sosa in a bid to recapture the belt that had been declared vacant after Romero’s failed post-fight test.

Following the loss to Sosa, Viloria wandered the junior flyweight-flyweight landscape, fighting journeymen and, basically, fighting for money to pay his bills and keep hope alive.

In 2009 Viloria got his shot back to the front of the line when met defending IBF junior flyweight champ, Ulises Solis in Quezon City, the Philippines and stopped the defending champ in eleven sizzling rounds.

Two fights later, though, Viloria’s career momentum was once again derailed in a defense against Colombia’s Carlos Tamara, who knocked Viloria out in the twelfth and final round of a close contest.

Once again world champ, Viloria has defended his belt twice, stopping former junior flyweight champ, Giovani Segura in eight one-sided rounds. Then, to settle old scores, he would stop Omar Niño Romero in nine rounds. Now, the 31-year-old is set to take on another tough test in “Tyson” Marquez at the Sports Arena in Los Angeles, California.

Viloria will clearly be cast as the favorite in Saturday’s title unification. His big edge in amateur and professional experience dictates that he be the favorite as well as the fact that he is truly the fighter with the greater skill-set.

But one factor that can’t be measured on paper or via computer is hunger.

Viloria will enter the ring as the better overall fighter, but not so much better that drive, hunger, and ambition won’t become deciding factors. If the bout becomes a brawl, Marquez’s heavier hands may take him to victory. A boxing match, on the other hand, will be much more favorable for Viloria.

When it comes to bouts like Brian Viloria vs. Hernan Marquez, predictions will be all over the place. There are just so many variables involved when prime, elite-level fighters go to battle. And that’s why fights like this almost always turn out to be so compelling.

While this flyweight battle may be overshadowed by the bigger contests taking place on the same evening, at the same time, pound-for-pound, this is the war the hardcore fight fans will want to be seeing.

Forget about taking sides or predicting the winner– just sit back and enjoy the spectacle.

Brian Viloria vs. Hernan Marquez, along with Roman “El Chocolatito” Gonzalez vs. Juan Estrada, will be broadcast live in the U.S. on Wealth TV at 9:00 PM ET / 6:00 PM PT.