Saturday night at Madison Square Garden in New York, Austin Trout scored a unanimous decision over Miguel Cotto. Years of hard work and dedication paid off for the Las Cruces, New Mexico native as he walked into Cotto’s adopted home turf and affirmed his status as an elite junior middleweight. 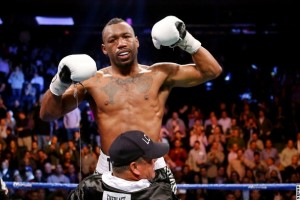 With the win, Trout now moves on to Saul “Canelo” Alvarez and the type of money fight he deserves after his well-earned victory.

All along, Golden Boy’s plan was to match their red-headed step-champion against Floyd Mayweather or Miguel Cotto– if he should get the win at MSG on Saturday. There was no provision in play about facing Trout. And, despite some random lip service to the contrary, there’s still no real plan to seriously consider a Trout fight.

Lest we confuse boxing with a real sport, this game isn’t about victories or defeats– Unless, of course, the “right” fighter wins.

A couple of weeks ago, the next great American heavyweight, Seth Mitchell, had the chiclets knocked out of him by Johnathon Banks. It was a touching underdog story fueled by Banks’ devotion and dedication to the memory of his late trainer, Emanuel Steward.

But Rocky stories be damned, this is boxing. Who calls “do over?”

“We will exercise the rematch option, and HBO will buy it.” Golden Boy’s Richard Schaefer told Lem Satterfield of Ring TV. “We’re currently working on a date.”

But boxing fans know this stuff. It happens all the time.

Amir Khan found himself fast-tracked to a WBA title fight for one of their minor “international” titles three months after Breidis Prescott had knocked him old cold in fifty-four seconds. Meanwhile, Prescott, for his shocking upset-rise from nowhere-Cinderella story walked around with nothing to do for five months, only able to parlay his Upset of the Year glory into a go-nowhere feature with Humberto Toledo on Friday Night Fights.

And this isn’t just a Golden Boy thing.

Richard Abril decisively outboxed Brandon “Bam Bam” Rios and not only found himself on the pointy end of the screw via split decision, but has had to watch Rios rise in weight and immediately become a top contender for a world title shot at junior welterweight, even before beating Mike Alvarado. Well, at least Abril was allowed to keep his fake WBA interim lightweight title, right? And he seems set for a shot at the vacant world title against Sharif Bogere– if someone can find the keys to Bogere’s tiger cage to let him out. But, still, Abril should’ve scored the upset, but was not only denied the victory but basically paid back eight months (and counting) of inactivity for his feat.

I could go on and on, but why bother? We all know the story.

This is not a sport, ladies and gentlemen. The concept of “sport” denotes a certain level of fair play and honest competition. In boxing, the sport is only sport when the money fighter finds a way to come out on top.

Of course, boxing depends greatly on fighters being able to draw a crowd and have their fights purchased by one of the networks. Trout, Banks, Prescott, and Abril can’t compare to Cotto, Mitchell, Khan, and Rios in terms of saleability. The temptation will always be  to give the money-makers every benefit of every doubt– as long as there’s no honest, independent centralized authority around to make sure that there’s at least a pretense of some logic involved in the sport.

A lot of the buffet divers in the boxing media will poo-poo the idea that a lack of structure and a lack of real, unbiased rankings are hurting the sport. They’ll even argue that the increasing number of belts is actually good for boxing.

Maybe to those of us who live and breath the sport, this chaos has little impact. We’re here for the long haul, like junkies who might complain about the potency of the crystal meth, but are stuck on the pipe, anyway. But what about those looking in from the outside?

Whether we care to admit it or not, a lot of boxing’s success and chance for future growth is dependent upon the interest of the casual fan and the willingness of the mainstream media to grant us access to their front pages and/or airwaves. And, right now, to them, boxing looks more like the WWE than the NFL.

Who can blame them?

We’d see the same thing if there were five Super Bowls every year and only the major market teams would be allowed to compete– even after losing in the playoffs.

But, oh well, it’s all forgotten by the next fight night, anyway. One of life’s truest axioms is that, in the end, most of us usually get what we deserve. Boxing has been giving it to us, in the end, for as long as I can remember.