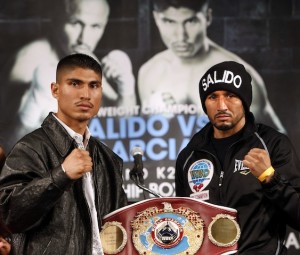 When you look at Salido’s record (39-11-2, 27 KO’s), he appears to be somewhat of a journeyman: wins more than he loses, but more losses than a true world class fighter should have on his resume. Don’t let the numbers fool you, most of those defeats came early in his career and those that came later were distance losses to world class opposition. Taking Salido for granted was basically what Juan Manuel Lopez did when he met Salido in April of 2011. At the time Lopez was undefeated in 30 pro bouts and the WBO featherweight champion, looking to set up a showdown with fellow undefeated titlist Yuriorkis Gamboa, who had defeated Salido seven months prior. Salido was a stepping stone for Lopez, but rather than stepping up, Lopez got stepped on when Salido stopped him in the eighth round taking the world title with him.

Salido returned to Mexico where he picked up two more stoppage wins (TKO 11 Kenichi Yamaguchi, TKO 8 Weng Haya) before returning to Puerto Rico in March of 2012, again as the underdog, to meet Lopez in a much anticipated rematch. After getting dropped in the fifth round, Salido once again rose to the occasion and after breaking down Lopez over the next four rounds, stopped him in the 10th. Since that bout Salido has fought once, stopping Moises Gutierrez in the third round in July. That bout racked up Salido’s fifth consecutive stoppage win since the loss to Gamboa.

Miguel Angel “Mikey” Garcia (30-0, 26 KO’s), is one of Top Ranks rising young stars. The USBA, NABO and NABF featherweight titlist is just 25 years old and seven years junior to Salido; he’s approaching what could be his best years in the sport. He’s stopped 14 of his last 15 opponents, and has had plenty of exposure to the spotlight being showcased on HBO, Showtime and pay per view events on multiple occasions. In addition, he’s a well experienced and gold medal winning amateur, pressure or stage fright won’t be factor.

Though this is his first attempt at a world title, there were negotiations for Garcia to meet Australia’s Billy Dib for the then vacant IBF featherweight belt back in 2011. That bout was scrapped when Garcia opted to meet Rafael Guzman on the under card of the Julio Cesar Chavez Jr.-Sebastian Zbik show at HBO’s request. Garcia would stop Guzman in the fourth round that night, then go on to notch four more stoppage wins over Juan Carlos Martinez (TKO 4), Bernabe Concepcion (TKO 7), Mauricio Pastrana (KO 2), and Jonathan Victor Barros (TKO 8). This will be Garcia’s fourth appearance on HBO, and his toughest opponent of his career.

A world title win for Garcia would be a step in the right direction to bigger and better things: more headlining bouts on the big networks and bigger money fights against high profile opponents. For Salido, a win is much more important: it’s a chance for the defending champion to prove he’s not just “the guy” who exposed Juanma Lopez or that he’s not simply “the guy” who had the right style to score two upsets in his opponent’s home country. It’s a chance for Salido to be more than just the spoiler; it’s a chance for him to stand out as a true world class fighter.