It was barely two years ago that Juan Manuel Lopez (31-2, 28 KO’s) was riding high. The former WBO feather weight champion was undefeated in 30 pro bouts, and lining up for a major showdown with undefeated Cuban star Yuriorkis Gamboa. All he needed to do was get past Orlando Salido in April of 2011. 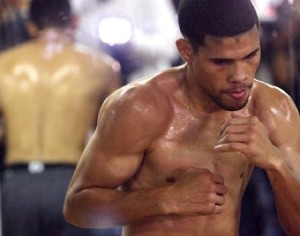 On paper, the bout looked routine. Salido had the distinction of being a former featherweight title holder (IBF version), which was a good selling point, but he had also lost 11 bouts and had come up short in most recent clashes with world class competition. All Juanma had to do was show up and look good. An added bonus: the bout was in Puerto Rico, Lopez’s home turf.

Lopez showed up, but it was Salido who did the rest. Maybe the Lopez camp underestimated the challenger, or maybe Salido was just that much better than anyone thought. Salido had Lopez’s number by the fifth round, when he dropped the champion and nearly had him out on his feet. By the eighth round it was all over; Lopez had been stopped on his feet, his undefeated record gone, and the WBO title around the waist of Orlando Salido. The Gamboa fight? That wasn’t looking good either.

Back in the ring six months later, Lopez racked up a quick, non-competitive second round stoppage of Mike Oliver, and then set his sights on a rematch with Salido. Salido still held the WBO title, and had notched two stoppage wins of his own. Despite holding a victory over Lopez and being the defending champion, Salido again travelled to Puerto Rico giving Lopez the home field advantage for the second time.

The rematch was brutal for both fighters and was mentioned in numerous circles as one of 2012’s fights of the year. After a slow start, Lopez gained a slight advantage in the fifth when he dropped the defending champ. He was favored on the official scorecards heading forward, though many unofficial scorecards had Salido ahead by a few points. Salido’s perseverance finally paid off in the 10th round, where being swollen and bloodied, he finally dropped Lopez 19 seconds into the round with a left hook after stunning him with an uppercut. Lopez beat the count, but was unsteady on his feet and at the 31-second mark of the round; the bout was waved off giving Salido his second stoppage over the former champ. The official scorecards had Lopez ahead on two: 86-84, with the third scoring the bout even at 85-85.

Lopez was classless in defeat. He immediately started complaining about the stoppage, which most stoppage victims do, but it was in his post fight interview that he did himself the most damage. He accused referee Roberto Ramirez (and his son Roberto Jr.) of having gambling problems, and stopping fights unfairly. It was a pretty serious accusation, one that landed him a one-year suspension, although Lopez “sort of” apologized after wards. The suspension was later reduced to 10 months, and his community service cut in half.

Santos is the former Brazilian super bantamweight champion, but brings little to the table. While the record looks good, his opposition is nothing to brag about: the majority of his victories come off fighters with near .500 records or far worse. The most recognizable name on his ledger is Jesse Magdaleno, who stopped him in two rounds last August. His last bout was a six round decision win over 1-14 Roberto Franz in December.

Santos will show up tomorrow night and play the role he’s been signed to play: a confidence building opponent, a tune-up for Lopez that will get his career back on the right track. Nothing less, and definitely nothing more.