This Saturday at the Crown Plaza Hotel in Saint Paul, Minnesota, Robert Brant (5-0, 3 KOs) is looking to affirm his standing as one of the sport’s brightest young prospects as he makes his sixth ring appearance in about eight months

The 22-year-oold Brant, who is a 2010 National Golden Gloves Champ and former member of the Memphis Force in the upstart World Series of Boxing, will be taking on pure resume-filler in Keith Collins (4-20, 2 KOs), but is eager to 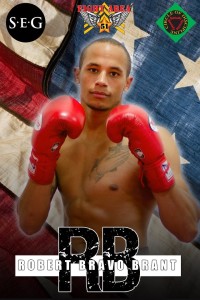 showcase his world class skills for a growing fan base.

The well-regarded middleweight prospect is already being regarded as one of the finest talents to emerge from the Minnesota fight scene in quite some time. Brant last fought January 5, besting Romon Barber over six one-sided rounds.

Also on the card at the Crown Plaza Hotel, veteran and locally-based journeyman, Phil Williams (11-5-1, 10 KOs) returns to the ring after an absence of about fourteen months following a TKO 3 loss to Polish light heavyweight contender, Andrzej Fonfara. Williams has also been in the ring with the likes of Don George, Antwun Echols, Matt Vanda, and Caleb Truax.

Williams will be facing Flint, Michigan’s Shujaa El Amin (12-3, 6 KOs) in a scheduled ten-round super middleweight bout. Formerly known as Dion Savage, he last saw action in May of 2012, when he took a decision from Joe McCreedy for the vacant USBO super middleweight title. Like Williams, El Amin has faced his share of quality opposition, with bouts against Adonis Stevenson, Farah Ennis, and Marco Antonio Periban on his resume.

For information on the rest of the card as well as ticket prices,  visit VitalCulture.com