We all knew that Amir Khan (27-3, 19 KOs) wouldn’t exactly be running a gauntlet after back to back losses to Lamont Peterson and Danny Garcia, but his latest re-branding effort appears to be taking him way back to the level of opposition he fought before he became a main stage player.

In a recent Golden Boy press release, which used the word “great” nine times, it was announced that the former 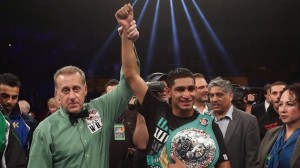 In Khan’s last bout, he slapped around a solid, but overmatched lightweight import, Carlos Molina, in a RTD 10 victory. Ostensibly, the reason for another soft touch, is for new trainer Virgil Hunter to finish remaking the former Olympic silver medalist into a well-rounded, truly world class fighter and take him away from just being a supremely talented athlete winning bouts on physicality, alone.

But against fighters like Molina and Diaz, Khan can win while still coasting and, certainly against Molina, it didn’t look like he had learned a damn thing while toying with the much smaller fighter from Norwalk, California. One has to wonder whether this easy road has been constructed for bank account padding and career longevity rather than for actual ring improvement.

Diaz, as solid as he was back in his prime, hasn’t been a real factor in the sport since his lightweight days back around 2007. A recent split decision draw with hot and cold welterweight prospect, Shawn Porter, has helped keep him afloat and at least semi-relevant, but Diaz is one of the oldest 33-year-olds in the game– and his legs show it.

However, the fighter from Coachella is a scrapper and he’ll put up a fight against Khan for as long as he’s able. Because of this, he makes the perfect candidate for a highlight reel knockout on Khan’s greatest hits video.