This week, WBO lightweight champ, Ricky Burns announced that he was ending his relationship with UK promoter, Frank Warren. Not-so-coincidentally, the Burns defection would come along just a couple of days after it was announced that the Burns-Miguel Vazquez WBO/IBF lightweight title unification bout slated for March 16 would be postponed.

A Vazquez stomach infection was announced as the official reason for the postponement– a statement that was repeated over and over again by Warren in the days following the announcement. However, rumors of the fight falling apart had been circulating for at least two weeks prior to the official postponement. As a matter of fact, as recently as Saturday of last week, it had been revealed by various sources, including Vazquez, himself, that the terms of the deal had not even been finalized for the bout. 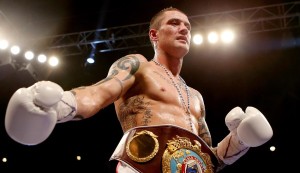 For Burns, who has had fights fall apart at the last minute on several occasions under the guidance of Warren, this was apparently the last straw.

Burns’ manager, Alex Morrison issued the following statement to the media: “I regret it has come to this because I have known Frank for nearly 40 years, but it has to be for Ricky’s sake. I felt we had to do something to stop Ricky stagnating. Two fights have been called off after he has trained hard for them and it was not even certain that the bout with Vazquez would have gone ahead on 20 April. In fact, I now doubt very much that fight was ever going to happen.”

Looking back on the March 16 all-star Frank Warren show in London, it all seems little more than smoke and mirrors. Burns-Vazquez had yet to be really finalized. George Groves, who was scheduled to be on the card, left Warren for rival UK promoter Eddie Hearn’s outfit, Matchroom Promotions. Even the announced return of heavyweight Dereck Chisora seemed to be pure fantasy, given the fact that Chisora had yet to even be licensed by the BBBofC at the time of the card’s postponement. The only main stage bout actually guaranteed to be on the card was Nathan Cleverly’s WBO light heavyweight title defense against Robin Krasniqi.

Warren, who achieved his greatest success as promoter for Ricky Hatton and Joe Calzaghe, has displayed an almost pathological need to have his fighters travel the road of least resistance in “small ball” stay-at-home bouts to friendly home audiences. As a result, large portions of his fighters’ careers have been chewed up in meaningless bouts against second and third-tier opposition, despite likely having the ability to accomplish a lot more on the world stage. It’s no wonder that fighters such as Calzaghe, Hatton, and Amir Khan never truly flourished as world class talents until leaving his jealous embrace.

Recently, though, Warren has had a tough time even keeping his fighters busy with regional tests. With rumors of money problems swirling around him, Warren’s ship now seems to be sinking quickly. Burns and Groves join the small legion of emerging UK stars, such as Kell Brook, James DeGale and Tony Bellew, who have severed ties with the promoter in hopes of greener pastures elsewhere. Warren still has Cleverly on board, as well as the unlicensed Chisora and a couple of solid prospects in Frankie Gavin and Billy Joe Saunders, but his once stellar stable is now otherwise filled with mid-carders and regional-level club fighters. Given the way bad news and career anxiety travels fast in boxing, it may be just a matter of time before he loses more of his talent.

Despite the public announcement ending his relationship with Warren, Ricky Burns is still officially under contract with his promoter until some severance deal can be arranged. So, this could either be a quick, painless cut between both parties or an ugly, prolonged legal battle that keeps him out of the ring for awhile.

Rumors have had Golden Boy interested in adding the Scottish champ to their upstart Golden Boy UK enterprise and possibly matching him up with Adrien Broner in June. But it’s all hush-hush, under the table stuff until Warren and Burns legally end their arrangement.

The real loser in all of this seems to be IBF lightweight champ, Miguel Vazquez, who appears to have been strung along for months in pursuit of a big money, high profile fight that may have never been an actual reality.

For the record, Frank Warren insists that he is still Burns’ promoter, that he has a legally binding contract with Vazquez to fight Burns, and that the lightweight unification bout will go ahead as planned on the new April 20 date.