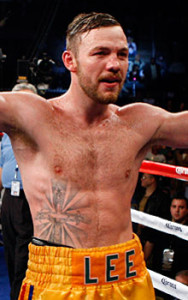 Lee, the former NABA and NABF middleweight champion, is coming off a 10 round decision win over Anthony Fitzgerald in Northern Ireland, but the last big exposure he had was in June of 2012, when he fought Julio Cesar Chavez Jr. on HBO. In a battle for Chavez’s WBC middleweight crown, Lee gave the champion all he could handle, and was ahead on all three scorecards when he just couldn’t hold off the bigger Chavez any longer, and was stopped in the seventh round.

His only other defeat occurred back in 2008 when he was stopped in the seventh round by Brian Vera. Three years later, Lee would even the score winning a 10 round decision in the rematch. Along the way, he’s fought and beaten Alex Bunema, Saul Duran, and Craig McEwan to name a few.

Darryl Cunningham comes into the bout on a three fight winning streak, but against lack luster opposition: the combined record of those three opponents was 44-73-8. His last step up in class was in 2011 when he fought Andre Dirrell and was stopped in two rounds. He appears to be a good opponent for Lee, and can give the Irishman a few rounds work, but a mid round stoppage in Lee’s favor seems like a reasonable prediction.

Heavyweight Tor Hamer (19-2, 12 KO’s) is a Broadway Boxing regular since entering the pro ranks in 2008. His stock rose quickly when he competed in, and won the U.K.’s “Prizefighter” tournament, a one night elimination series of three round bouts. Hamer met Kevin Johnson in the final, winning a three round decision. He was stopped in his last outing by undefeated Vyacheslav Glazkov on NBC’s Fight Night program.

Hamer faces Maurenzo Smith (11-5-2, 8 KO’s) of Houston, Texas. Smith is looking to capitalize on this opportunity; after meeting undefeated opponents in each of his last three bouts, he’s on a three fight losing streak.

Undefeated Delen Parsley (10-0, 3 KO’s) takes on Louis Rose (5-1, 1 KO) in a light middleweight bout. Parsley, who’s fought numerous times at this venue, is coming off a second round TKO win over Tyrone Selders in January. Rose last fought in December, dropping a six round decision to Tony Hirsch.

Middleweight Lamar Russ (12-0, 7 KO’s) is making his second appearance at BB Kings. He also fought his last bought at the same venue defeating Jose Medina over eight rounds. He’ll face Russell Jordan (15-9, 10 KO’s), a former New York State welterweight title holder who has only fought once since 2010 and is on a four bout losing streak.

Lou DiBella’s Broadway Boxing can be seen live at BB King’s Blues Club and Grill in New York City, or live on Go Fight Live (gfl.tv) beginning at 7pm EST. The card will also be shown on SNY television at a later date.