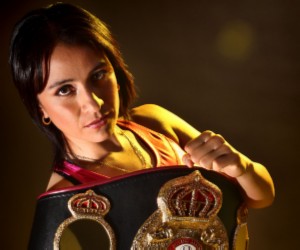 one defense before facing Gonzalez: a decision win in a rematch with Perez. Gonzalez, who turned pro in 2009, had been inactive in 2010. Scores of the bouts were 97-94 twice for Gonzalez and 96-94 for Garcia.

Both women took part as team mates in a boxing reality show during 2011, “Todas Contra Mexico”. The show was hosted by female boxer Maureen Shea, and featured a team of eight of Mexico’s top female fighters competing against another team of boxers from around the world.

In Chile, undefeated WBA Fedalatin bantamweight champ Carolina Rodriguez (9-0) picked up a world title, winning a 10 round decision over previously unbeaten Ana Lozano (7-1, 6 KO’s) for the vacant WIBA bantamweight title. This was Rodriguez’s third outing of the year, she turned pro in 2010. This was Lozano’s first title attempt; she entered the bout on a six fight knockout streak.