Former heavyweight titlist, David Haye has postponed his anxiously-awaited all-Brit showdown with Tyson Fury, scheduled for next Saturday, due to a cut requiring 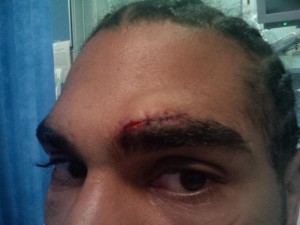 Conventional boxing wisdom states that a cut heals at approximately 1% per day, but that may vary depending on the depth of the actual wound. So, there’s no way to accurately predict when Haye may be ready for a return to sparring and then rescheduling of the Fury bout.

Photo evidence, though, shows the cut to be wide and in a very inconvenient place for a return-minded Haye.

Hayemaker Boxing regret to inform that David Haye has been forced to postpone his September 28 bout with Tyson Fury due to a deep cut suffered during the final spar of training camp.

The cut above his left eyebrow occurred in round two of sparring on Friday night (September 19) and required six stitches by a plastic surgeon at St. Thomas’ hospital. Because of the gravity of the cut, these stitches will now remain in place for five to seven days.

Unfortunately, after being properly assessed, Haye was left with no choice but to postpone his fight with Fury, scheduled for next Saturday night in Manchester. He is currently waiting on further medical assessment to determine the extent of the postponement.

“Gutted isn’t even the word,” said a crestfallen Haye. “Mentally, I’m on the floor at the moment. I’m devastated most of all for my loyal fans, my family and my team, as well as Tyson Fury and his team.

“I know injuries and cuts are part and parcel of our sport, but this doesn’t change the feeling of disappointment and sadness I’m experiencing right now. To everyone who has bought tickets, booked hotels, and followed this fight since it was announced, there is absolutely nothing I can do except apologise from the very bottom of my heart.

“Even when everything seems to be right on track, sometimes life throws you a curveball. I will somehow have to try and make the best of this horrible situation. But, right now, I’m in bits about what has happened.”