“In chaos, there is fertility.”
― Anaïs Nin

Whenever someone talks about reforming or cleaning up boxing, there’s always one crucial factor left out of the discussion. It’s the key to all that’s horrible in the sport as well as being at the heart of what makes it great. It’s the reason secret blogging societies and their weekly voodoo rankings rituals are utterly meaningless and why voluntary PEDs testing will always be little more than a smokescreen. 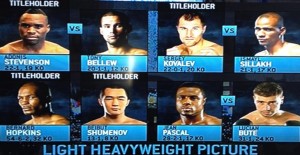 The fact is that boxing, at it’s core, is all about chaos.

And just as it’s chaotic nature attracts death, injury, corruption, and all the worst in human nature, it also provides the foundation upon which the entire sport is built and a proving ground for the best in human nature.

Bringing a forced “order” to a sport so disjointed, if it were at all possible, would probably kill the sport rather than reform it.

An example of this chaos right now in the light heavyweight division, where there are four world champions, from four different countries, competing in two different nations for three different promoters on two different cable channels.

Stevenson shared the bill with WBO titlist, Sergey Kovalev, who crushed his opponent, Ismayl Sillakh, before calling out Stevenson for a unification bout.

Hopkins, the oldest ever world champ at 48 (soon to be 49), is considering his options– Stevenson, Kovalev, or WBA champ, Beibut Shumenov, a mostly inactive champ who retains some star power because of his belt. He also could offer challenges to super middleweights Andre Ward or Carl Froch, if they should choose to move up in weight.

In a sport run like a sport, most of this talk would not be happening and none of the bouts that do get made would have the same meaning or impact.

Stevenson would be champ and there would be a fair progression of challengers beneath him, but nothing would mean the same anymore. Kovalev would not be KOVALEV without his rise to world champ status and Hopkins probably wouldn’t be in the sport at all. If all things were fair in boxing, Froch would be toiling away for at least a couple of years at 175 before even being considered a light heavyweight title contender. The winner of January’s Jean Pascal-Lucian Bute bout would barely be entering the champion’s radar, rather than serving as a possible big money opponent in the immediate future.

Boxing benefits from the chaos.

The bouts that do take place in a reformer’s utopia would mean less, drive fewer casual fans to the arenas and TV sets, and result in a dull, sterile fight picture. They would also do a real number on a fighter’s career earning potential. Boxing, in seeking to clear its conscience, would be gouging out its heart and soul.

As much as we hate to admit it, boxing leans heavily on the sanctioning bodies and the current chaotic boxing model. While piss-poor officiating and awful judging are byproducts of a deeply compromised system headed by four deeply compromised organizations, the sport gains more from the current set-up than it loses.

The current system allows for four individual paths to growth for fighters, who can work towards stardom, unfettered by the mass of restrictions that would come from one single governing board. Eventually, paths may converge for unification bouts. Maybe all four champs will be tied together only by fans, who will debate the merits of each titlist. Whether champion vs. champion fights get made or not, boxing wins. The fan buzz, now so much a part of the way boxing promotes itself, is there.

This is no longer 1959, where boxing was small enough to be kept orderly and the sport got a boost from the mainstream press. Boxing is now, truly, an international sport with a hundred different nations sanctioning bouts, using tens of thousands of registered fighters, under the watch of thousands of separate commissions, funded by hundreds of different promoters, overseen by four recognized sanctioning bodies and at least a half-dozen lesser-regarded organizations.

A one champion, one division, one rankings move would be deadly to the current version of the sport. This is not to say that improvements shouldn’t be made and reform allowed to wither on the vine. However, a wistful turn to fantasy league logic would hurt more than help at this point. This is a bitter pill to swallow for all those who are reformers at heart– myself included.

Boxing is a sport being torn in hundreds of different directions, all at the same time. But that same force is also holding it in place, keeping it commercially viable in an era where a niche sport has had to depend on its sub-niches to stay relevant.

But through all the whirling chaos and disorder, most of the big fights do eventually get made. Pacquiao-Mayweather foolishness notwithstanding, there is no real dearth of best vs. best bouts in boxing. This is because money, the underlying force behind all of boxing, will always power the push behind giving fans the fights they want to see. And the current system, like it or not, does allow greater ability for more fighters to become actual stars at the worldwide level.

Consider this boxing’s very own version of Chaos Theory. A relatively simple sport and corresponding business structure has evolved into a complex, utterly interdependent, self-sustaining system. From the outside, one may see nothing but chaos, but remove or drastically change any element of its current system and the result could be disaster.

You can email Paul at paulmagno@theboxingtribune.com or tune into his weekly Boxing/Zombie Preparedness Podcast: “Left Hook to the Brains.” Paul is a full member of the Burger King Kids’ Club, a born iconoclast, and an ordained minister in the Universal Life Church.