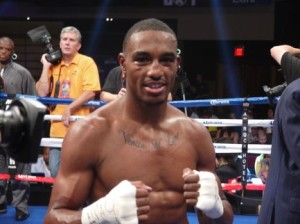 In the night’s main event, J’Leon Love (16-0, 9 KO’s) out boxed Lajuan Simon (23-5-2, 12 KO’s) over five rounds before closing the deal in the sixth. Love staggered Simon, who was fighting for the first time in two years, with a right hand, and followed up with a series of shots along the ropes before knocking Simon out with a right hand at the 2:48 mark.

The co-feature attraction saw Badou Jack (16-0-1, 11 KO’s) and Rogelio Medina (31-5, 25 KO’s) slug it out for five rounds, with Jack finally breaking through in the sixth frame, dropping Medina three times to secure the TKO victory.

Carlos Cardenas (20-7-1, 13 KO’s) made it to the third round against Mickey Bey (19-1-1, 10 KO’s) before being stopped at the 2:22 mark when he was dropped by a left to the body, left hook to the chin combo. Cardenas beat the count, but on unsteady legs, prompting referee Bobby Howard to wave off the bout. Bey was coming off his first defeat this past July when John Molina stopped him in the 10th round.

In the night’s televised opening contest, Christopher Pearson (10-0, 9 KO’s) made short work of Acacio Ferriera (14-1-1, 12 KO’s), stopping him in the opening frame. Halfway through the round, Ferriera was staggered by a right hand; a follow up series of punches by Pearson put him down and out at the 1:44 mark.