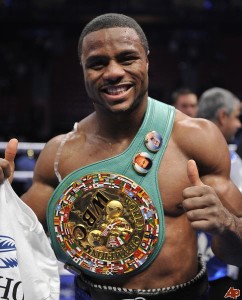 This battle of adopted Canadians, billed by some as the biggest fight in Canadian history, served more as a testament to the respective weaknesses of two world class fighters recently exposed as less than the some of their parts.

Pascal, who has resorted in recent fights to the utterly pessimistic tactic of round stealing, changed nothing in the ring despite promises to the contrary.

Round after round, the tactic was the same. The Haitian-Canadian wasted time, threw the occasional punch, but otherwise left any meaningful offense until the last thirty seconds of the round in the hopes of stealing a “10” from the judges at ringside with an awkward, usually ineffective, last-second bum rush.

Bute, for his part, played the role of the deplumed peacock, aimlessly walking after Pascal until being forced into a response by Pascal’s round-stealing surges.

Disappointment reigned supreme at the Bell Centre and derisive whistles could be heard by the late to middle rounds as fans realized that this was probably as good as things were going to get.

In the last three rounds, though, Pascal slowed down and facilitated an offensive surge from Bute that had the Romanian import looking fairly impressive and somewhat reminiscent of his pre-Carl Froch self.

The twelfth round featured Bute doing his best work in the fight, landing solid shots upstairs and downstairs against a Pascal who seemingly allowed himself to be trapped in a corner.

Unfortunately for Bute, the last minute effort would end up being nowhere near enough to take the fight.

After the bout, Bute was at a loss for words to explain his inability to pull the trigger while Pascal, during his turn at the mic, artfully dodged the question of whether the fans would see a Pascal-Adonis Stevenson world title bout next.

Just a little over two months after beating Magomed Abdusalamov into a coma in an entertaining brawl, Perez showed none of the same spark or drive in this contest with Cameroon’s Takam.

The Cuban heavyweight contender started slow, suffered a deep cut on the right eyebrow from an accidental headbutt in round three, and then faded in every subsequent round.

Takam, whose only real accomplishments are stoppage victories over elderly versions of Michael Grant and Frans Botha, stepped up the pace at the end of the sixth round and was dominating the contest at the end of the fight. However, his efforts proved to be too little, too late to take the victory.

Whether Perez’s poor performance was a psychological reaction to the tragedy that happened in his last bout or a physical letdown from jumping back in the ring too soon after a tough fight, it’s clear that Perez’s status as a world class contender needs to be temporarily reconsidered after Saturday.