Los Angeles based Irishman Jamie Kavanagh (15-1-1, 7 KO’s) has been added to the St. Patricks Day event at the House of Blues in Boston, Massachusetts that’s headlined by the rematch between welterweights Danny O’Connor (23-2, 7 KO’s) and Vivian Harris (31-9-2, 19 KO’s). 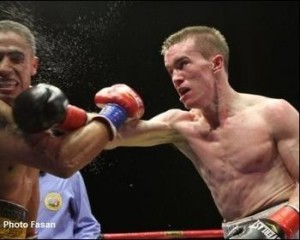 The 23 year old lightweight took to the pro ranks in 2010 and remained unbeaten until this past December when he took on the former WBC Latino super featherweight champion Daniel Ruiz in Mexico and was stopped in six rounds. He’s eager to get his career back on track and put the loss behind him.

The bout is scheduled for eight rounds against an opponent to be named, and will be Kavanagh’s first trip to the east coast since 2010; he made his pro debut at Madison Square Garden on the Amir Khan-Paul Malignaggi under card.