One thing boxing fans love to do when they feel an opponent is overmatched is to call him out as a glorified caddie, cabbie, laundromat worker, jailbird or bartender:  the proverbial “tomato can.” 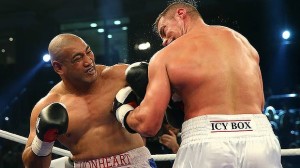 Such names are already being bandied about to chartacterize World Heavyweight Champion Wladimir Klitschko’s opponent, Alex Leapai of Australia.

And this time, there is some truth to the humorous tomato can charges being lobbed at Leapai: he really does drive a truck for a living, and to top it off, he is also an ex-con.

Perhaps it was Leapai’s modest background that made former “hottest man in the division” Denis Boytsov, usually a man with a bodybuilder’s physique, come into the ring for his last fight against Leapai (after finally breaking free from a bad contract with Universum boxing to sign with Sauerland Event) looking chubby.  Boytsov was already puffing hard by the third round in what was supposed to be a warm-up for a fight with Wladimir Klitschko, and things got worse from there.

Boytsov ended up getting pushed around by the powerful Samoan-born fighter, and was put to the canvas on three different occasions.  The final scores of 98-90 and 96-92 (twice) highlighted just how badly former boy wonder Boytsov had fallen.  Leapai himself wept tears of joy as he contemplated a lucrative meeting with the world champion, Wladimir Klitschko.

That fight, now set for April 27 in Germany, is seen by many in the boxing world as a foregone conclusion.  Leapai (30-4-3, 24 KO), after all, lost to American Kevin “Kingpin” Johnson, who Wlad’s elder brother Vitali had totally embarrassed in a WBC title shot back in 2009 in a virtual shutout, leaving Johnson with new nicknames like “Queenpin” and “Safety Pin.”

If Leapai is supposed to be acting the role of the humble truck driver and ex-con who’s learned his lesson, he’s not sounding like it.  Instead, he is showing little respect for Klitschko, intimating that the Ukrainian world champ, who lacks only one major belt (the WBC strap recently given up for now by boxer-turned-politician Vitali), will not even be one of his most difficult opponents.

“I don’t believe [Wladimir] has faced anybody with the power that I’ve got,” Leapai bragged recently, before comparing himself to Mike Tyson.

“Tyson was only a short fighter [like myself] and he dominated for so many years (Leapai is listed at 6’0″, Klitschko at 6’6”,  though he has often claimed to be an inch shorter).

“[Tyson] had the power and I’ve got the power too.”

One might be a spoil-sport and ask Leapai what happened when Tyson, admittedly past his peak, went up against the giant Lennox Lewis, but it would seem cruel to try and take away any hope the Aussie has.  But while Tyson certainly had power, Wladimir Klitschko also sports a KO percentage of 79.69%.

Still, like his fellow Samoan-born, New Zealand-based boxer David Tua–the last fighter from Down Under to mount a serious world title challenge when he took on and lost a wide decision to WBC champion Lennox Lewis–Australia’s Leapai has a puncher’s chance here.  Even in his stoppage loss to American Kevin Johnson, he had the American in trouble early, but couldn’t finish him off, and ended up gassing out.

Klitschko, however, seems to be more worried about what comes next after his mandatory fight with Leapai.

“I’m missing the fans in the US,” Klitschko lamented.

“The fan base is huge here and I would love to fight back in the States … but I need a broadcaster and I need an arena.”

Here’s some advice to Wladimir: give us a knockout of the type that occurred when you fought Calvin Brock in 2006 at Madison Square Garden.

Avoid the aesthetic disaster that befell you against the sloppy Povetkin and give us some direct aggression.

Surely both HBO and Showtime would be paying close attention.

A fight at some point in New York City, possibly back at MSG, for the WBC strap–giving Klitschko all the major belts–would surely bring out South Brooklyn’s huge Eastern European Klitschko fan base and help fill the stadium to capacity.

Alex Leapai already proved what he can do when someone overlooks him.  Ask Denis Boytsov about that.

And so did the late Corrie Sanders many years ago.

Ask Wladimir Klitschko about that.