Undefeated Yemeni minimum-weight Ali Raymi (20-0, 20 KO’s) is looking for a fight. He recently challenged the undefeated WBC number one contender, Thai fighter Wanheng Menayothin (32-0, 10 KO’s) to a bout in Yemen. The comical Raymi told Fightnews.com, “I know that in Thailand, promoters pay Wanheng in pineapples, 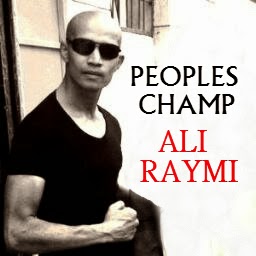 coconuts and flavored condoms, I’m offering him real money to fight me in Yemen. If he feels Thailand will pay him the same money and wants me to come to Thailand, I will be more than glad to do so because I fear no judges, always winning by KO. I know that Yemen is a better option because sponsors will pay more, opposed to Thailand where the pay will be weak. Regardless, no excuses. Let’s make this fight. Don’t go complain again that I am harassing your fighter. It’s boxing. If you don’t want him to fight me, go pray for peace.”

Raymi holds the record for most consecutive first round knockouts to start a career, stopping all 20 of his opponents in the first round. Every one of his bouts has taken place in Yemen, 15 being against undefeated opposition with the other five being against those making their pro debut. After being inactive for all of 2012, he’s made up for lost time by fighting two or three times a month throughout 2013. Menayothin currently holds the WBC International minimum-weight title. He has also held the “silver” version of that same title, as well as the WBC Youth World minimum-weight title, which he won in his third professional bout in 2007.