In my ongoing series, I randomly pick a boxing-themed movie from the “streaming” section of Netflix and give it a whirl.

This week, we enter the blue-tinted world of Northern Ireland in Jim Sheridan’s The Boxer (1997, 113mins), and watch as he fights folks in the ring, and fights the violent culture of I.R.A. men that have become addicted to violence. Boxing nuts may want to take note that Daniel Day-Lewis’s boxing trainer (and the fight consultant for the 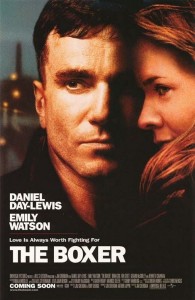 entire film) is none other than the Clones Cyclone himself, Barry McGuigan.

After spending 14 years in prison for terrorist associations and refusing to name names, Danny Flynn (Daniel Day-Lewis) is a free man, and returns to his home in Belfast. Danny has cut ties with the I.R.A., though, so there aren’t any friendly faces to welcome him home from prison. Instead, he gets hard glares and stolen glances, “Is that Danny Flynn?” everyone seems to ask.

Danny was a promising up and coming fighter back when he was 18, and his future was stolen from him after he had been wrapped up in the world of patriots and martyrs that inhabit Irish-rebel folklore. Not only did he lose his career, but he lost the love of his life, Maggie (Emily Watson), the daughter of I.R.A. leader Joe (Brian Cox).

Good luck getting these two back together, though, since Maggie has married, and had a son, with Danny’s best friend during the 14 years since. Her husband is currently serving time in prison for I.R.A. activities. Danny and Maggie should keep their distance, since it’s established in the first 15 minutes that there’s potential deadly consequences for interfering with a “prisoner’s wife.”

Danny reunites with his old trainer, Ike (Ken Stott), and together they open up the old boxing gym under the banner of “Non-Sectarianism,” i.e. Protestants and Catholics together, training and fighting, with the politics left at the door. This gets under the skin of Harry (Gerard McSorley), an I.R.A. commander and childhood acquaintance of Danny’s, who lost his son to The Troubles and has become dependent on the violence of war.

If this seems like a lot of plot, it is. Still, at times, The Boxer, seems like a slow movie. Danny and Maggie stare at each other, take walks, and have romantic conversations. Joe and Harry argue about Harry’s interference in peace negotiations with the British. Maggie’s son wonders if his dad will be released if peace is reached. Ike and Danny argue over whether or not the gym should accept new gear for the kids, even if the gear is from the cops.

It’s a lot of stuff, and it seems like a slow build up to the climax. This is odd considering the other movies I’ve watched for this column. The Boxer is efficient storytelling about complicated issues and still feels like it’s taking its time. Characters interact as if they have a history with each other, and the viewer is encouraged to just figure it out instead of loads of expository dialogue. Whenever we need a piece of information to fill in a hole here or there, it seems to come up naturally in a conversation somehow, which is probably one of the hardest parts of writing a script. It can be very pleasurable to be treated like an adult by a movie and just watch natural interactions between two old friends. Sometimes showing two people comfortable with each other is all the backstory you need.

Last week, I suffered through 90 mins of The Opponent in which nothing much actually happened. Here we have three-times the plot complications in a movie that still clocks in under two hours and I don’t have anything to really complain about.

Oh, and then there’s the boxing.

Many of us know about how nuts Daniel Day-Lewis can be when it comes to preparing for a role. The guy immerses himself in the characters he plays (check out My Left Foot, and then watch Gangs of New York) and Danny Flynn in The Boxer gets the same treatment. Day-Lewis moves like a boxer. He has the stance of a man who has been on the deck but has never stopped fighting, his chin tucked, ready to parry a punch and fire one back. Daniel Day-Lewis jumps rope like a beast, he works the pads like a pro.

There’s three fights in this movie and they are the best I’ve seen in a boxing film in a long time. Definitely in the short time that I’ve been writing this article. The punches sound real, the fighters move naturally, the clinches seem to make sense. And then the landed punches seem like actual, real, landed punches, and not like two actors or boxers fake-hitting each other. The action in the ring is clear, it’s not really necessary to have a ringside announcer or a trainer narrating everything for us as we can see it all, clearly, on screen.

So kudos to Barry McGuigan for his part in the filmmaking process.

As with pretty much every movie and song about The Troubles, The Boxer is not very easy to watch at times. Things seem so hopeless and dour. The constant rumbling of British helicopters watching over the violence in the garbage strewn streets, and the British soldiers in their outposts in the background of just about every shot, establish the setting and tone. The heroes of The Boxer travel through holes cut in walls in apartment blocks. They avoid the scrutiny of the occupying presence.

Hell, you could probably replace the British helicopters with Black Hawks and re-make The Boxer with the components of The Boxing Girls of Kabul. Turn Danny Flynn into a girl and you might have a hit among the young adult crowd (assuming the movie is not horrible). They can argue about the next car bombing and whether or not they should accept gear from the Americans.

Although there is no sex in this movie, there is some tough violence on screen. For the most part, it’s kept to a minimum, but it’s realistic and shocking when you see it. This is not a movie for young children.

Many of the movies I review seem to also be available streaming on Amazon Prime, so don’t let not subscribing to Netflix deprive you of taking this journey with me, especially since I plan on watching 4 Weeks of Sunshine for next week and Netflix feels like I’ll give it about two stars. The only user review is very negative. Hooray!

Also, feel free to follow me on Twitter at @OgYokYok if you want to argue about boxing or movies or boxing movies.