Hola familia and welcome to a robust, artisanally-inspired edition of boxing’s number one source for number one sources. This week we’re taking a few peeps out of our boarded up windows to see if we can put together some potential 2014 matchups based on recent events. Once we gather up enough courage to step outside and face the night we’ll talk tips, tricks and codes for the Nintendo Entertainment System™ 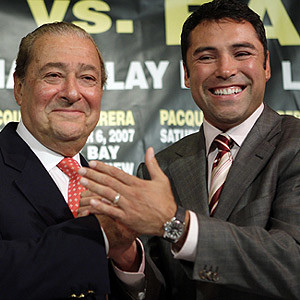 and as always, we will be concluding the proceedings with my thoughts on AMC’s The Walking Dead. Grab yourself an ice cool Zima and make sure you have enough ammo, rations, arrows and medical supplies, we’re about to start the show. With that being said, I gave you your instructions in the dressing room, what I say you must obey – Cuidate, escucha me, toca los manos y buena suerte…Let’s get it on!

I have long held the position that any high-profile bout involving “El Ciclon De Guantanamo” will be pure boxing entertainment. Aside from his promotional difficulties (and having only fought three times in the last three years), the Cuban is among the most physically gifted in the entirety of the sport.

On April 14th of 2012, Yuriorkis Gamboa was slated to face Garcia stable mate, Brandon “Bam Bam” Rios, but problems with the (apparently non-existent) fight contract kept Gamboa from appearing at Top Rank press conferences to promote the event. This move was taken as a sign of disrespect by Team Garcia even though there were some legitimate problems behind the scenes involving the Cuban defector’s purse and promotional agreements.

Now, with the rise of Mikey Garcia, a more compelling combination of fighters presents itself to the boxing world. The white-hot pound-for-pound entrant has a chance to become a multi-division champion with a victory over the now Twitter bound Yuri Gamboa.

Now it just remains to be seen if both sides can come to semi-amicable terms to make this fight happen. Mikey Garcia would likely have to relinquish his WBO super featherweight championship (at least temporarily) and ascend to lightweight where Gamboa holds a WBA world title.

After the poorly executed (and completely legitimate…) “poll” that Mayweather Promotions issued to their star’s millions and millions of social media followers, only a paltry 35,579 votes (according to Yahoo! Sports) were actually tallied from that publicity stunt, with Amir Khan conveniently finding a 57% success rate. Conversely, a third party ESPN Sportsnation poll generated 67,000 votes with the Argentine garnering a whopping 62% of the fan’s picks.

Other independent polling followed suit from various well known boxing websites, all having Marcos Maidana leading over Amir Khan by a healthy margin.

I contend that Floyd Mayweather honestly does not care who he faces next (between Khan and Maidana). Neither possesses a style that he hasn’t seen, regardless of what the Bolton-born Pakistani would have you believe. This whole thing was done purely from a ‘feeling out’ perspective, to see how the public would react to these potential fights.

When all is said and done (and Mayweather stops Maidana) this whole fiasco will be a distant memory for most witnesses, no more intrusive than the many botched and bungled drug testing debacles throughout boxing’s recent history.

While I hardly think that Tyson Fury is the second coming of any legendary heavyweight, he does possess some freak show qualities about him that makes a potential bout with American born Deontay Wilder a must see event. Fury’s height, frame and attitude makes for good T.V., while his serious lapses in training (ahead of fights) and his defensive shortcomings can make for great T.V.

The Bronze Bomber, Olympian Deontay Wilder is currently 30-0, 30 KOs, an outstanding professional record until you view the long list of Subway sandwich artists and flight attendants he’s creamed in order to get that remarkable tally.

Once Wilder is allowed to face more reasonable opposition (assuming he handles fellow American, Malik Scott in March), it would be refreshing to see two guys with such a big upside put their undefeated records on the line. On a side note, Fury’s brother, 19 year-old Hughie Fury looks to be the real goods in the family; watch this one.

Obviously in this day and age we all know that boxing is, first and foremost, a business. When we see junior middleweights ‘calling out’ middleweights on Twitter and other outlets we know that it is, at least in part, for show and it should be taken for what it is – just talk.

If you’re a fighter in 2014, sometimes your best bet is to throw a bunch of spaghetti (in this case, Tweets) at the wall and see what sticks. In Erislandy Lara’s case, he has several issues before him that could present real road blocks for a fight with GGG to even be feasible. First, Lara is a Golden Boy Promoted boxer and while Golovkin is with neither Golden Boy Promotions nor Top Rank (he is with K2), he is fighting exclusively for HBO at the moment and they don’t do any business with GBP fighters for the time being.

Golden Boy Promotions C.E.O., Richard Schaefer had this to say on HBO’s stance – “It is clear that in the aftermath of the biggest names in the sport, Floyd Mayweather and Canelo Alvarez, leaving HBO for Showtime that HBO is obviously upset at [Mayweather adviser] Al Haymon and me, and this is their way of getting back at us…I think it’s an ill-advised strategy because the only ones that are getting hurt are the HBO subscribers, which were used to seeing the best fighters on HBO. That will obviously no longer be the case. Having said that, I wish HBO well.” Schaefer would also note that HBO was “…drinking the Top Rank Kool-Aid…”.

What all that means is we can basically forget about GGG fighting ANY GBP fighters unless he severs his contract with HBO. That means no Kid Chocolate, no Erislandy Lara, no Canelo/Angulo winner and definitely no Mayweather.

After Nonito Donaire’s relatively poor (until the TKO) showing against former foe, Vic Darchinyan in November of last year, one thing is for certain: Donaire needs a spark of inspiration if he’s to continue operating at the highest level in boxing.

Some would say that the Filipino Flash had something taken away from him by the unified super bantamweight champion, Guillermo Rigondeaux when the two met at the Radio City Music Hall in New York City last year.

Rigondeaux, a 2:1 underdog in the bout, managed to dominate nearly every moment of their encounter. Though there was some confusion regarding the scoring (ESPN’s Dan Rafael scored the fight 114-113 in favor of Rigondeaux while HBO’s Harold Lederman – and every sane individual scoring the fight at home – scored the fight 118-109 in favor of Rigondeaux), the Cuban easily won at least 10 of the 12 rounds and some would argue all 12.

What this means is that in order for Nonito Donaire to fully restore his confidence, he’s going to need some confidence builder style of matchups. While on paper a fight with the fledgling Lomachenko could look like an absolute mismatch, the same could have been said when Donaire took on an 11-0 fighter just two bouts ago.

Assuming that the Ukrainian born Vasyl Lomachenko handles faded former champion, Orlando Salido in their upcoming March 1st fight, why not pit Donaire against the young fireplug? Not only will Donaire get a gut check against a live opponent, perhaps he can drum up enough confidence to challenge Rigo to a rematch.

Thanks for joining us again this week, team. We’ll be back at it next week when we review whether or not Judith was saved by her adopted family before the prison was overrun by Walkers. Rick and Carl may have their differences (stemming from Carl’s immaturity and limited scope of what his father has done for him and their group) but even in a zombie apocalypse, you shouldn’t take shit from little kids… furthermore, Andrea was a streetwalker with very poor judgment and a penchant for men in powerful places. Until next time, santé!