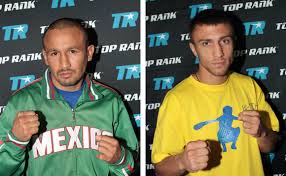 Salido, now 33 and a three-time world titlist, will come into Saturday night’s HBO co-main event as the underdog. Salido captured his third world title in October with a stoppage win over Orlando Cruz, just one fight removed from a stoppage loss to Mikey Garcia. On paper, Salido’s record reflects the work of a gate keeping journeyman, but seven of his losses came in his first nineteen fights and between the ages of 15 and 22. Over the course of a career that will span 18 years to the date on Saturday night, Salido has taken on Juan Manuel Marquez, Robert Guerrero, Rogers Mtagwa, Cristobal Cruz, Yuriorkis Gamboa, and Mikey Garcia.

Lomachenko has only fought four rounds as a professional, but he won’t be at a serious experience disadvantage. As an amateur, Lomachenko won a reported 396 fights, twice captured Olympic Gold (London and Beijing), and won the Amateur World Title four times.

Salido is at his best when he’s putting pressure on his opponent inside close range. He’s an effective body puncher with a good right hand. He has a tendency to throw his punches too wide, increasing his openness to short, sharp counters down the middle.

Lomachenko fought with the poise of a well-developed prospect in his pro debut, albeit against a fighter with a respectable record built up against club-level opposition. He showed fast hands, good power, and some elusiveness to complement his offense. On the few occasions he was in close quarters, he comported himself with poise and confidence of a veteran. The only knock on Lomachenko at this point is he’s fought a mere four professional rounds. And while he looked good against Jose Ramirez, it remains to be seen if he’ll be able to handle the aggression and bag of veteran tricks Salido will certainly throw his way.

Stylistically, Lomachenko is just right to handle a brawler of Salido’s caliber and mileage. Lomachenko is young and fresh and looks to have the foot speed and agility to keep Salido turning and searching. Salido will bring the fight to Lomachenko early on and look to throw him off his game and disrupt his game plan. Lomachenko will need to use movement and keep his counters short and accurate as he turns Salido. If Lomachenko can keep the fight at his pace and go to the body early and often, he’ll have an easy go at the later rounds and should have no problem in securing the unanimous decision victory.