Scottish Exhibition Centre, Glasgow, Scotland– Yes, Terence Crawford (23-0, 16 KOs) is that good. The 26-year-old Omaha, Nebraska native proved himself to be a main stage player by walking into the back yard of defending WBO lightweight titlist Ricky Burns (36-3-1, 11 KOs) and showing clear and decisive superiority over one of the consensus two best in the division. 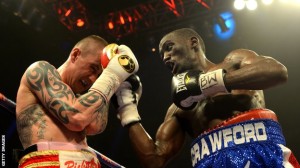 After two apparent “feeling out” rounds, Crawford kicked his game into overdrive, employing the relaxed, smooth American style that has earned him recognition as one of the best young fighters in the sport.

Burns put forth an effort to stay in the game, but simply could not compete.

Quicker, stronger, and better-skilled, Crawford switched from lefty to righty throughout the fight to further confuse the game defending champ. A sustained body attack from Crawford also served to take some life from Burns’ legs and prevent a late rounds comeback.

Despite his dominant performance, though, one gets the feeling that Crawford could’ve amped things up even more to win via KO or TKO. And, given Burns’ controversial draw against Rey Beltran last September, it might’ve been a good idea not to take a win for granted in Scotland.