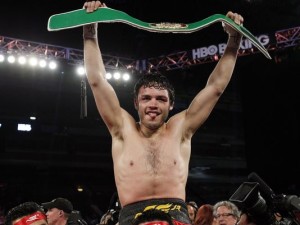 Unlike his sluggish performance against Vera last September, an in-shape Chavez Jr. was more active and more willing to engage, leaving no doubt as to who the better fighter really is.

No matter who Vera fights, though, a battle will be waged and some blood will be spilled and Saturday’s bout was no different.

The native of Austin, Texas pushed forward the entire fight and landed some solid shots, but Vera is no puncher, even at his optimal weight. Fighting one division above his natural weight against a guy likely rehydrated to the cruiserweight limit made Vera’s arm punches even less deadly.

Chavez, confident that he could take Vera’s best and sure of his own conditioning, pushed forward and thumped his opponent with big shots upstairs and downstairs throughout the contest until a twelfth round emergence of a juking and jiving. defense-minded “Sweet Pea” Chavez Jr. brought mad jeers from the crowd and the end of any “Chavez will one day be loveable” talk (He would later say that he got on his bike partly due to an injured hand and foot).

Still, Chavez won the bout decisively and did well in his second shot at beating Vera. The three judges’ scorecards read: 117-110, 117-110, and an inexplicable 114-113, all for Chavez. The Boxing Tribune scored the bout 118-109, also for Chavez. (A point deducted from Vera for pushing down on Chavez’s neck was not a factor in the scoring)

In the co-feature, with the HBO announce crew attempting to paint the picture of a scheming, cheating Orlando Salido (41-12-2, 28 KOs), the story of the fight between Salido and two-time Olympic gold medalist, Vasyl Lomachenko (7-1, 1 KO) told another tale.

Salido’s story Saturday night at the Alamodome in San Antonio was one of a fighter who had worked himself down to 128.25 lbs from a walking around weight of over 147, but simply couldn’t shed the the two and a quarter pounds to make the featherweight limit.

Salido, who had to vacate his WBO title at the weigh-in, was dead on his feet for the last three rounds of the twelve round bout after building a solid lead. If this weight move was part of a grand plot to have a size advantage over the Ukraine’s Lomachenko, it was a really poor, fairly dumb plan against a fighter likely to have a tremendous speed advantage in the bout.

And while Salido entered the ring as a full welterweight at 147 lbs., adding just under 15% body weight between weigh-in and opening bell, Lomachenko, who entered as a small junior welterweight at 136 lbs., added about 9% body weight in that same period of time. The weight was hardly a fight-changing factor and, as a matter of fact, ended up being more of a burden to the veteran Salido.

As for the fight, Salido buried underhook uppercuts to Lomachenko’s body the entire fight, nullifying the Ukrainian star’s ability to generate any meaningful, sustained offense.Over the rounds, those body shots strayed down below the belt, to the blind eye of referee Laurence Cole.

But the weight struggle took its toll on Salido as his legs grew incrementally heavier as the rounds passed.

By the ninth round, Salido looked to be dragging his feet and trying to tie up the quicker, younger Lomachenko. By the last half of the twelfth round, Salido was hurt and ready to go, but a wealth of experience helped him survive to see the final bell.

The scorecards had two judges splitting 115-113 scores between the two fighters, making the third judge and his 116-112 score in favor of Salido the deciding factor in this split decision. The Boxing Tribune scored the bout 115-113, also for Orlando Salido.