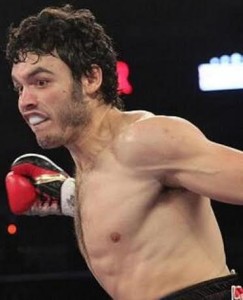 tossing aside the long-winded, the obvious, the questioning and the pragmatic. What we were left with are all completely legitimate emails, only the contents and the author’s names were changed to protect their identity. Stamp your passports and spend $500 to bring your pet to a different country – we’re about to start the show. With that being said, I gave you your instructions in the dressing room, what I say you must obey – Cuidate, escucha me, toca los manos y buena suerte…Let’s get it on!

Were you surprised when Floyd Mayweather announced that he would be facing Marcos Maidana on March 3rd? – Dale H.

It was pretty easy to see that one coming. Khan was 2-2 in his last 4 with his last fight seeing him squeaking by a fighter who was chosen specifically to be a soft touch. Maidana hasn’t lost since joining with trainer Robert Garcia, who has led the Argentine to four straight victories including the 2013 upset of the year versus Adrien Broner.

I’ve asserted that Floyd Mayweather stops Marcos Maidana inside of eight rounds and I won’t change my prediction now. I do think that Marcos represents the most game opponent The Money Team has seen in some time. Unlike Cinnabon Alvarez, MM is not only tenacious but a seasoned veteran as well. Maidana won’t be afraid to make things ugly in an attempt at nullifying some of Mayweather’s advantages.

What do you think Adrien Broner’s next move is? – Lori G.

Well, if he’s being guided in the right direction he will try to set up a winnable fight on a big card. The smart money says that he’ll appear on Mayweather’s undercard, most likely against a well-known name.

Hey, Jesse, super cute cat. So, what is up with this weather?  -“Brian”

Thanks, Brian…if that is your real name. Well, according to weather.com, “One of several semi-permanent weather systems over the Earth, the polar vortex is an area of low pressure in the upper atmosphere, primarily in the stratosphere, the layer of the atmosphere above which most of our sensible weather occurs (known as the troposphere).”

So, in other words, our deviant ways (i.e. polluting Mother Earth) that forced accelerated decaying of our planet’s upper-atmospheric ozone layer has caused these abnormalities in the normal weather systems. So, in other other words, we’re all doomed.

If Amir has smart people around him they will try to line up a fight on Floyd Mayweather’s undercard. It makes no sense burning bridges because his feelings were hurt.  Some people shouldn’t have their phone in their hands at all times is all I’m saying. I’ve heard Adrien Broner’s name mentioned as a possible opponent for Khan. If that fight somehow gets finalized, both men will be fighting for redemption in a sense – and will have the largest stage possible to do so.

What is the best cure for a hangover? – Carl G.

Assuming that you’re old enough to drink, the best hangover cure is a simple cup of soup. Start with a knob of ginger around the size of a golf ball. Peal with a spoon or the back of your knife, once peeled, press the flat part of your knife on the root and smash it hard (this breaks up the natural fibers) then chop into small rough dice.

Take a small bundle of green onions (scallion) and cut off the hairy bit on the white end. Now cut the green part of the onion off and set aside. You should have a small group of long, white onions. Smash and dice in the same manner as the ginger and place both aromatics in a small soup pot.

Cover with nearly boiling water ¾ the way up your pot (not bring to a boil) and add 1tsp sugar, ½ tsp salt and ¾ tsp MSG (yes, it’s harmless). To that add 1tsp Kikoman soy sauce and ½ tsp powdered chicken or vegetable bullion. Lastly, a healthy glug of Chinese rice wine like Shaoxing to top it off. Give it a stir and call me in the morning.

What did you think about Floyd Mayweather throwing $20,000 in the ring to J’Leon Love for his last second stoppage on Friday? – Daryl D.

Thanks for the email, Daryl. It was pretty convenient that a fully responsive Vladine Biosse was stopped 45 seconds away from the end of the bout when there were plenty of other occasions that I felt he was in more trouble than was he in the final moments. Referee Benjy Esteves apparently felt like that was the “correct time” to stop it…Maybe he got the memo.

Do you feel that the British boxing commentators are overtly biased in favor of their fighters? – Ricky G.

Ahoy Rick. Yes, I absolutely feel that Sky Sports boxing analysts are quite in favor of their boys. By round three, they were dismissing Terrence Crawford’s effort without really giving him a chance to shine. To their credit, though, they were giving TC some respect when he began to separate himself in the bout. That’s not to say that American commentators are any different; perhaps more subtle, if anything. Let’s not pretend that HBO color commentators are much more than glorified pitchmen.

Hola Jesse, love the show! Did you think that Lomachenko disappointed in his fight with “Siri” Salido? – Glenn & Maggie R.

Gracias, ustedes dos hacen una linda pareja! No, I think that “Hi-Tech” was in a very fortunate position to be thrust on that kind of a stage in only his second fight. Even the great Guillermo Rigondeaux didn’t have that kind of push. That being said, Loma is a really good, natural fighter; a future world champion for sure. Once he gains more professional experience he will be a dangerous opponent for anyone.

Is Chavez Junior back? – Hershel G.

I would say that that is a pretty safe assumption. I saw a hunger in Junior’s face and eyes that normally is inspired by massive amounts of Mexico’s most expensive mota. Word is he has some reality show coming out in his homeland, so other than being the “Son of Legend”, he had other motives for getting up for this rematch.

Honestly, I liked what I saw from Julio Cesar Chavez. He can really fill out his shoes with a healthy amount of dedication – he has so many natural advantages in his physicality and experience. Chavez’s popularity is absolutely undeniable and he has the full support of Top Rank (not to mention “family” in the WBC), I think his future is probably going to be much brighter than most will care to admit.

Thanks for joining us again this week, team. We’ll be back next Sunday with some more catch phrases, one-liners and Hebrew curse words. We will also be chopping up the Canelo Alvarez versus Perro Angulo Pay-Per-View. You can catch part one of their All Access series HERE. Don’t forget to board up your windows, load up on medical supplies, weapons and ammo…the end is very fucking neigh. Until next time, santé!

Please send all love and hate mail to JesseBoxingTribune@gmail.com – Funny cat pictures and Devon Alexander memes will be also accepted at this address. Pretend we’re friends on Twitter @JESSEBOXING