MGM Grand, Las Vegas, Nevada– Saul Alvarez (43-1-1, 31 KOs) utterly dominated and outclassed Alfred Angulo (22-4, 18 KOs) through most of ten rounds, only to have his moment in the spotlight partially blocked by a questionable stoppage by referee Tony Weeks. 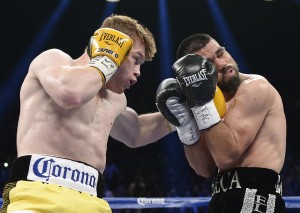 From the first exchange of the first round, it became apparent that there was an ocean-wide disparity in physical talent and skill between the two Mexicans as Alvarez’s hand speed immediately broke through any thought of defense Angulo may have had.

Alvarez, coming off a one-sided loss to Floyd Mayweather last September, battered the flat-footed “Perro” at will, creating several dozen wince-worthy moments in the first half of the bout.

Angulo, despite his work with trainer Virgil Hunter and nefarious chemical king, Victor Conte, absorbed everything thrown at him flush. He had no plan “B” and not much of a plan “A,” either.

Things were slightly less one-sided in the second half of the bout, but much of that was caused by Canelo taking time off to, presumably, take a breather and do his own version of Floyd Mayweather defense.

The controversial ending came in the tenth round when flush shot number bazillion jerked Angulo’s head straight back and prompted referee Tony Weeks to jump in and stop the fight.

Predictably, the quick stoppage brought on a chorus of boos and at least partially detracted from a dominant Alvarez performance that should’ve otherwise been a step forward in the young fighter’s quest for main stage respect.

Options are wide open for Alvarez at the moment, although his ever-growing body may be demanding a trip up to middleweight in the very near future.

Santa Cruz pushed forward as usual, showing the balanced, supremely efficient offense that has earned him recognition as one of the sport’s best young talents.

By the middle rounds, Mijares had stopped looking for the key to success and began merely surviving. Thrown off by the non-stop pressure of the defending champ, Mijares never got a chance to launch any sort of sustained offense of his own and was beaten decisively.

The Boxing Tribune scored the bout 120-108 for Santa Cruz, agreeing with two of the three ringside judges.

— A spirited tenth round capped off a bout controlled by the smooth boxing and offensive prowess of Jorge Linares (36-3, 23 KOs). Japan’s Nihito Arakawa (24-4-1, 16 KOs) pursued as expected and had his moments, but was never able to initiate the kind of offensive hurt that has derailed Linares in the past. Venezuela’s Linares would go on to take a unanimous decision by scores of 98-92, 100-90, and 100-90. The Boxing Tribune also scored the fight 100-90 for Linares who, with the victory, became the mandatory contender for WBC lightweight champ, Omar Figueroa.

— Sergio Thompson (29-3, 26 KOs) registered a solid performance in defeating Ricardo Alvarez (23-3-3, 14) via unanimous decision. Alvarez, who suffered the first two knockdowns of his career, fought back and landed several solid shots, but appeared to be at least one full level below Thompson. Despite two curious 95-93 scores and a proper 97-91 tally, the right man was awarded the decision. The Boxing Tribune scored the bout 97-91, also for Thompson.