Last Saturday night, your subscribers were treated to a Boxing After Dark telecast consisting of a battle between two second tier junior welters and, in the main event, a light heavyweight prelude to nothing as Sergey Kovalev fought 30-1 underdog Cedric Agnew for the right to dip his big toe into The Void. 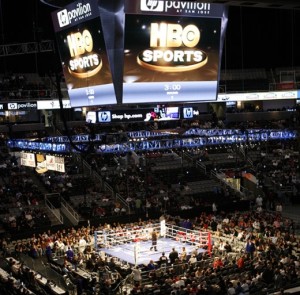 It was the perfect way to cap off the first quarter of a year light on action, but heavy on backstage bumbling and corporate excuses.

If you hadn’t bought off Thomas Hauser and made him a shut-your-mouth-and-do-nothing consultant, he may have used his HBO moles to report on what, exactly, is your problem. At this point, former Showtime genius, Ken Hershman is making Ross Greenburg look like Seth Abraham.

A pretty solid spring featuring your top talent is going to fool some into thinking that all is well with you, but April-June could very well be the last-gasp overhand right of a one-time champion about to be sent to the canvas.

To put it bluntly– the future does not look bright for you, the network that set the standard for televised boxing in the modern TV age.

Three of your top money earners– Pacquiao, Marquez, and Cotto– are likely one loss away from retirement. A fourth earner, Chavez Jr., is a drama queen who may implode at any time. Gennady Golovkin is still more curiosity than star, facing the likelihood of having only one big fight with which to catapult himself into stardom– a showdown with 39-year-old middleweight champ Sergio Martinez, who is breaking down physically and already has one foot out the door (regardless of what happens in his upcoming bout with Miguel Cotto). Andre Ward, Mikey Garcia, and Timothy Bradley are legitimate elite-level fighters, but are not major draws and have very few big-fight possibilities. Sergey Kovalev is on the road to nowhere, trapped in a division where everyone worth fighting– Stevenson, Hopkins, Shumenov, even Chad Dawson– is now over at rival network, Showtime. One-time stars Nonito Donaire and Brandon Rios are damaged goods after embarrassing recent losses.

And while the world collapses around you, there appears to be a stubborn digging in of heels and doubling down on the wounded-pride business gaffes that put you into this predicament.

According to reports, you’ve been tight with the wallet and reluctant to appease talent looking for some security. You apparently let Adonis Stevenson go over to Showtime without much of a fight, passively giving up 2013’s Fighter of the Year and instantly transforming Stevenson’s chief rival and burgeoning beast, Kovalev, into a sad Frankenstein monster harmlessly roving the mountains.

Of course, you sealed the deal for your own demise when you made the decision to turn your beef with Golden Boy Promotions and Al Haymon into a public affair.

Angered at GBP’s direct line to main stage bouts on Showtime, you gave the company and its talent the preemptive boot and forever burned the bridge between you and them. It was a childish and shortsighted move that is coming back to bite you on the ass.

Even if you had no intention of ever dealing with Haymon or Golden Boy again and circulated anti-Haymon and anti-GBP memos to everyone in your company from the CEO to the squinty doofus with the mullet in the mail room, going public with your intentions was the wrong move. It made you come off as the villain, whether it’s true or not. Fans don’t care about the politics behind why they’re not getting what they want. Like any consumers, they just want a good product.

If McDonald’s suddenly starts serving Brillo pads in their burgers instead of meat patties, the CEO of McDonald’s wouldn’t go to the press to blame their beef provider for raising prices and necessitating the move to metallic scrub pads instead of meat. No, they’d just figure out a way to get their customers some actual beef before dishing out a bad product to its customers.

There was no need to back yourselves up into this corner.

But, as long as your corporate overlords are willing to keep boxing as part of their programming package, there’s still hope. However, it will take some thinking outside the box and recognition of the fact that your cart has, indeed, been forced off the road.

Here are just a few tips from bomb-throwing scribe to media powerhouse:

Fans still want to believe in the heavyweight division and will still watch if the product is good.

Whether you decide to try and nab a Klitschko for your airwaves or not, there are plenty of quality match-ups to be had in the heavyweight division. I can think of at least a half dozen right off the top of my head. You don’t have to have the best heavyweight in the world on your network, fans just want the best fights.

So much quality action happens in the lower weight classes. It’s almost criminal that neither premium channel has ever tried to do anything with a quarter of the sport’s athletes. As a matter of fact, right now, the flyweight division is the deepest and most intriguing in all of boxing.

The long-held belief is that the little guys don’t sell in the mainstream American world, but there’s never even been much of an effort to invest in trying to sell them. Anything can be sold with the right marketing and salesmanship and, especially at flyweight right now, you have the chance to take on a low-risk challenge for a potential fan-pleasing payoff.

For the price it takes to put together the typical WCB telecast, you could stage an entire flyweight tournament. With a growing Hispanic and Asian population alongside a content-hungry boxing fan base, a trip below featherweight is a sound gamble and an investment in the future.

Ditch the head-to-head dueling dates against Showtime. Also, who says every show has to be on Saturday night?

For crissake, your big daddy is Time Warner. Twist some arms and call in some favors. Find a way to use the massive media army of your parent company to your benefit. The promotional possibilities are infinite. Subscriptions, not ratings, rule your world. Bring some more casual fans and interested strangers into your universe.

And do something meaningful with the internet. How about an occasional internet-only live stream featuring a top prospect? Build your stars at the internet level, create a buzz among the hardcore fans, and plug them right into your TV programming with an already-built fan base behind them. With so many online possibilities available to a company of your size and power, your lack of vision in this area is almost criminal.

This is the most basic of all steps, but also the most important. You need some real boxing people putting together your bouts. Stop with the one-sided squashes and infinite showcases for guys like Golovkin. Do what you have to do in order to make quality bouts with complimentary style match-ups. You have the authority to call all the matchmaking shots– use it. Make sure that each and every televised card has at least one “did you see that” bout.

These are just a few suggestions from an unpaid wannabe secret consultant. HBO Boxing is important to the sport but, from watching the way things have been going down recently, it looks like blind pride is quickly taking you down the road to nowhere.