Sometimes athletes get a bad rap for being all brawn and no brain. No athletes know this bias better than boxers and professional fighters. But instead of being pigeonholed as meatheads, many are ditching the stereotypes to show that they’re much more than a mean right hook. 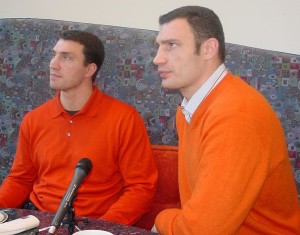 of well-rounded athletes. The Ukrainian brothers are both heavyweight champions, as well as political and social activists. Vitali is the leader of the Ukrainian Democratic Alliance for Reform, as well as a Member of the Ukrainian Parliament. Wladimir Klitschko proposed to his current fiancé, American actress Hayden Panettiere, in October of 2013. and the two were supposed to married later this year. However, as TIME Magazine reported, in a gesture of protest, the two have decided to put their wedding plans on hold due to the current civil unrest in Ukraine.

Together the brothers also founded the Klitschko Foundation. The foundation states that their mission is “to help young people to practice the philosophy of healthy living and healthy thinking, and advise government on the development of sport and education in Ukraine to provide physical, spiritual and intellectual formation of the young generation.”

The Klitschko brothers aren’t the only ones who have put their hearts into various charities. Unfortunately, because of the violent nature of their sport, many fighters’ generosities are commonly overlooked. SB Nation listed some of the amazing acts of kindness that some of the bigge

st MMA stars had done over the years that received little to no attention in the media.

After the earthquake and tsunami in Japan in 2011, MMA fighter Enson Inoue traveled through the most devastated areas to offer residents food, water, supplies, and clothing. He even brought toys for the children. The article stated that Inoue “drained his own personal savings in an effort to bring relief to every person he could reach.”

Also mentioned in the article was UFC middleweight Brian Stann. Stann is the

president of the non-profit group, Hire Heroes USA. The organization helps US military veterans and their spouses with job placement and training, at no cost to the veteran. The group was even awarded the Call of Duty Endowment Seal of Distinction for its effectiveness.

Although the fighters may seem intense to borderline frightening at times in the ring, and just as serious in their humanitarianism, it doesn’t mean they don’t know how to cut loose and support one another. They frequently get together during matches and cheer on fellow fighters—and they’re rumored to be a pretty fun gang to do so with. It’s all further proof that while their career is based off injuring another person, a lot of them are big (very strong) softies at heart.