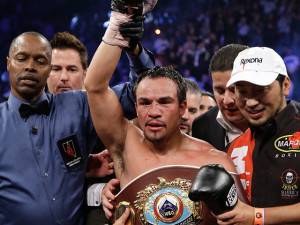 The saving graces of an otherwise anticlimactic match-up were an exchange of knockdowns in the eighth and ninth rounds that finally put fans on the edge of their seats.

The Marquez knockdown came at the end of the eighth round, the product of a perfectly-timed right hand sent Alvarado to the canvas hard. To Alvarado’s credit, he got up, survived the closing seconds and delivered his own knockdown punch in the following round– albeit nowhere near has hard as Marquez’s.

Except for those two moments in the fight, this was all Marquez. The 40-year-old future Hall of Famer fought a controlled fight and was able to avoid the possible danger zone of having to go toe to toe with a bigger and younger fighter.

Alvarado would’ve benefited greatly from a more aggressive approach since, on the few occasions when he did push, he accounted well for himself.

But Alvarado found himself unable to pull the trigger and/or invest in the pursuit of Marquez and a one-sided decision was the end result.

Marquez now, possibly, maybe, moves on to a fifth encounter with Manny Pacquiao.

In the HBO televised co-feature, tall and well=schooled Viktor Postol (26-0, 11 KOs) of the Ukraine outboxed Turkish fringe contender Selcuk Aydin (26-3, 19 KOs) over ten rounds and then put him away in the eleventh with a picture perfect hook-uppercut combo.