“The angry, aggressive, spiteful, bitter, war-hardened, tough, strong, mentally determined dangerous fighter, brutal warrior – that’s what I am. You’ll see that guy turn up on 31 May I promise you that because I am ready.”—Carl Froch

“He’ll say he’s a ’championship fighter’ he’s done 12 rounds several times before I think he’ll come out do his best for six rounds, hang on, do his best, get a bit of confidence, and think I’ll blow up.”—George Groves 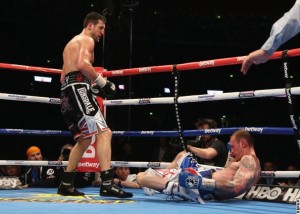 “You won’t throw another shot like Carl Froch’s knockout blow in your career, it was a peach. I thought Groves was busy but he was getting slower and slower, he was getting more predictable and Froch landed the punch.” –Richie Woodhall

“I got complacent, allowed him into range and I paid the price” -Groves

“How do you define a great punch?”… Your opponent laid out on the boards, eyes flickering like a faulty strip light, leg horribly bent. That’ll do it. “That was the best punch I’ve thrown in my life…It landed lovely, closed the show.” — Carl Froch

On a wild night at Wembley, it was a tale of small mistakes with big implications. And more proof that when boxing gets it right there is no sport as thrilling. Hearn built it and they came in droves. More of the same, please.—Ben Dirs. BBC Sport.

It was my sense that Saint George’s best chance was to come out fast and make it a fire fight ala Benn-Barkley. Groves starts fast, Froch does not. Thus, if the Cobra can withstand an early attack and then take George into the late rounds, his superior experience in title fights and his solid stamina should prove the difference as he closes the show around the tenth or eleventh round even though Groves seems to be expecting that strategy.

The atmosphere was super-charged and the anticipation palpable. The fighters did not disappoint as they waged a competitive and often tactical battle.

While Groves started well as expected using his left jab to control matters, an ever-so-subtle change occurred in the fifth round as he started to fight with his mouth open. A savvy and more relaxed Froch and his corner saw the door of opportunity open. He quickly launched a body attack complemented by effective flurries. He also positioned the fight advantageously (i.e., in his ring territory). But then a Groves left hook in the eighth suddenly get Froch’s attention and that of the HBO team which did a remarkable job throughout the fight.

Carl’s effective attack lasted until the 2.34 mark of the eight round when the Cobra pinned Groves against the ropes but instead of going to the body as he had been doing during the previous three rounds, he feinted with a left and out of the blue went upstairs with as clean an overhand right as you will ever see—it left the Saint in a heap with the thousand-yard stare.”

Says Jacob Steinberg of the Guardian: “Froch completely duped Groves. He disguised his intentions brilliantly with a dummy of a left feint which wasn’t meant to do anything other than keep Groves’ eyes off the monstrous right hook that was hurtling its way on to his chin. Groves fell instantly….” Saturday 31 May 2014.

American Referee Charlie Fitch looked directly into Groves glazed over eyes and stopped the fight without counting. No controversy this time.

For Froch fans it was immensely satisfying. For Groves’ fans it was terribly disappointing. For boxing fans, it was a special treat.