Only in boxing’s completely dysfunctional world of today can someone proudly promote a fight where the top junior welterweight in the world moves up to welterweight in order to take on the no. 71 ranked lightweight in the world. But not only is that bout being made, it’s also the main event of a Showtime triple-header showcased in what has become one of the sport’s preeminent venues, The Barclays Center in Brooklyn, New York this Saturday. 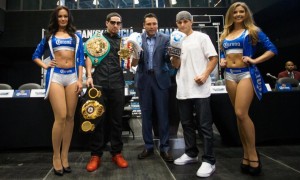 WBA/WBC 140lb.  champ, Danny Garcia (28-0, 16 KOs) was originally set to defend his belts against the clearly undeserving Salka, but ran into issues with the sanctioning bodies. Yes, this bout was such a farce that even the greedy alphabets wanted nothing to do with it.

So, a cynical title defense became a cynical welterweight contest at a 142 lb. catchweight.

In his last bout, Garcia’s Puerto Rican “homecoming” was almost ruined by what was thought to be a relatively safe challenger in Mauricio Herrera. Through twelve rounds, Herrera outhustled and out-fought a complacent and soft-looking Garcia at the Coliseo Ruben Rodriguez, but wound up with a majority decision loss.

This time, the insurance against a possibly soft and complacent Garcia was to enlist the services of Rod Salka (19-3, 3 KOs).

Even an Ebola-stricken Garcia could likely steamroll the moderately-skilled Salka, whose greatest claim to fame thus far has been a spirited majority decision loss to Canelo Alvarez’s talent-challenged brother, Ricardo back in December of last year.

This is a major lose-lose fight for Garcia, who is looking for bigger and better things at welterweight, eventually (Floyd Mayweather). There is no way Salka should be competitive in this bout, so anything less than utter dominance will knock Garcia a full rung down the ladder of public acceptance.

The Lamont Peterson-Edgar Santana co-feature on this card is probably the least absurd bout of the evening.

Peterson (32-2-1, 16 KOs) is rebuilding after a third-round TKO loss to Lucas Matthysse in 2013 and, although still IBF junior welterweight champ, is looking to reclaim some of the career momentum he had before being raged upon by the “Machine.”

New York-tough, Santana (29-4, 20 KOs) was, at one time, a well-regarded regional prospect. However, a drug trafficking conviction in 2008 resulting in a prison sentence cost him three years of prime career real estate and the once-again active Santana, at 35, is not the same fighter he once was.

At the very least, though, expect a solid effort from Santana in what could be his last chance at a world title.

It’s not so much that the bout between Brooklyn’s own Danny Jacobs (27-1, 24 KOs) vs. Australia’s Jarrod Fletcher (18-1, 10 KO’s) is a bad match-up, it’s just that as a “world” middleweight title fight, it’s about as legitimate as James Toney’s claim to own piece of the world heavyweight title.

For the WBA “regular” world middleweight title, Jacobs-Fletcher should, at best, be for the no. 10 slot in the middleweight Top 10.

“Golden Child” Jacobs’ comeback from cancer is inspirational and it’s clear that the 27-year-old is a legitimate talent. The question is whether he’s a world class, main stage talent or simply a high-end fringe contending talent. We won’t get many answers from this bout with the untested and one-dimensional Fletcher, whose biggest bout was a second round TKO to British prospect, Billie Joe Saunders in 2012.

This Golden Boy show has the feel of a slapped-together one-off TV date fulfillment while issues between Golden Boy and Al Haymon are addressed behind the scenes.

At least, let’s hope that to be the case, because this card is a major fail and it would be truly discouraging to think that this is indicative of what the future of Golden Boy looks like.