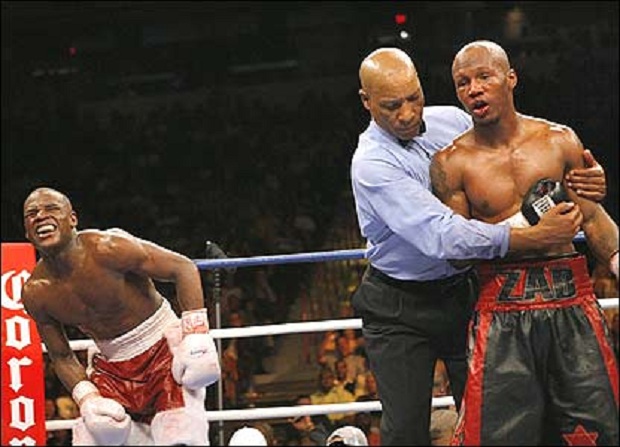 Just shy of catching him as the undisputed world welterweight champion, Floyd Mayweather faced Zab Judah after he dropped a decision to an over-matched, but better prepared Carlos Baldomir. At the time, many felt that Judah’s boxing ability and speed were at least as good, if not better than Mayweather’s.

In the early rounds of the fight, the two were evenly matched. Judah’s speed was giving Mayweather issues and his awkward southpaw style aided in the undefeated fighter’s slow adjustment. A Judah counter right hook in the second round caused Mayweather to stumble backwards off balance, grazing his glove off the canvas in the process, but it was (incorrectly) not ruled a knockdown.

As the match wore on, Mayweather’s timing began to sync and he found a home for a quick jab to the midsection. He used that punch to create openings for a heat-seeking straight right hand which bloodied the face of Judah and began Zab’s mental unraveling – Two thirds of the way through a close fight and Floyd began to really pull ahead on the score cards.

Realizing that his plan was no longer working and he most likely down on the cards by a considerable margin, a visibly frustrated Judah landed a flagrant left hook to the jock of his opponent in the final seconds of the tenth round – He quickly followed up this blatant foul with a punch to the back of the head of the now collapsing Mayweather.

With Floyd Mayweather slumped over in pain, his uncle, Roger Mayweather leaped into the squared circle and attempted assaulting an out of control Zab Judah. Then, in short order, the entire ring was filled with Mayweathers and Judahs. Now, both camps, security forces, police and officials all entered the ring and a near full-scale skirmish broke out.

After some participants were ejected from the Arena and order was restored some time later, the two fighters restarted the hostilities and had their last two rounds. Mayweather mostly taunted and stayed out of the desperate Judah’s range and cruised to a unanimous decision.