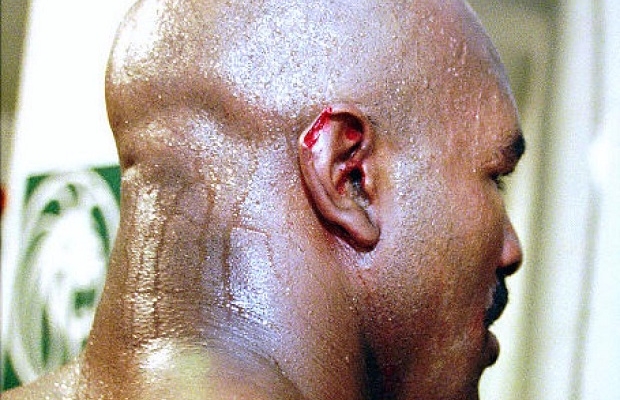 Way back in 1996, just eight fights removed from his colossal loss at the hands of Buster Douglass in Tokyo, Japan (but more than seven years since that fight due to his prison sentence), Iron Mike Tyson met with Evander Holyfield at the MGM Grand in Las Vegas, Nevada.

In what turned out to be a money spinning pair of matches, the betting favorite, Mike Tyson was upset and stopped by TKO in the first meeting. Late in that fight, Holyfield, sensing a hurt Tyson, swarmed him and forced a referee intervention in the 11th round.

Less than one year later, the two would again meet in Las Vegas, but the post-lock down version of Mike Tyson was largely ineffective against the former undisputed world champion. Iron Mike found himself absorbing sharp headbutts and big right hands from the Real Deal.

Mike Tyson’s fragile mental state was on full display when, after sustaining a cut from repeated headbutts, a frustrated Tyson would lean in and bite a hunk out of Holyfield’s ear. Two points, one more bite and a few moments later and Tyson would lose by disqualification. Tyson was ordered to pay a fine of $3 million dollars, or 10% of his $30 million dollar purse.