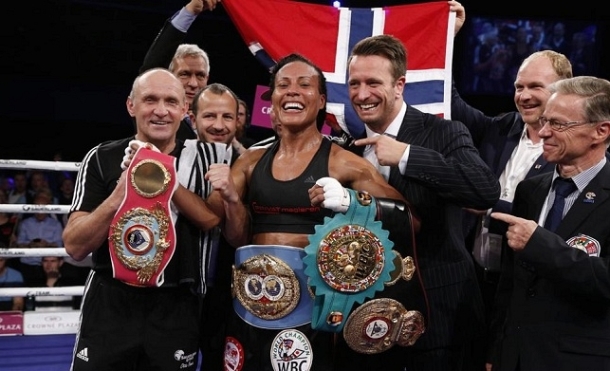 The undefeated champ came into the fight with three world titles in her possession representing the WBA, WBC, and WBO as welterweight champion. With over five years of championship experience in her nearly eight year pro career, she faced Habazin, the recently crowned IBF welterweight title holder. Habazin, fighting out of Zagreb, Croatia, had won the vacant title in her previous outing this past March, defeating Sabrina Giuliani in Belgium. She had failed in a prior bid at this same belt when she was outpointed by Eva Halasi a year earlier.

The contest was a showcase for Braekhus, who displayed her superior talent over the course of the 10 round event, showing why she is considered boxing’s best pound for pound female in the game. Habazin made a solid effort, but Braekhus edged her out every round, leading to a 100-90 shutout on all three judges’ scorecards.

‘’I’ve been dreaming of this moment for a long time,’’ said the newly unified champion. ‘’To become the first female boxer to unify a division is a huge achievement and something that I am extremely proud of. I would like to thank all the fans that travelled to Copenhagen to support me and Ivana for the part she played in this historic fight.’’

Promoter Nisse Sauerland followed: ‘’Cecilia is a phenomenal athlete. Not only will she go down in history as the first female unified champion but it is our belief that she will be remembered as the greatest female boxer of all time.’’

The welterweight queen had chased a bout with American boxer Holly Holm, who held titles as a light welterweight, welterweight, and light middleweight for different sanctioning bodies throughout her career. Braekhus had even offered to make the fight in the U.S, but Holm retired in May of 2013 to pursue a career in MMA after a 10 round decision over Mary McGee.

Also on the card, Sweden’s undefeated light welterweight Klara Svensson (14-0, 5 KO’s) won her first major world title with a 10 round decision over Marie Riederer (15-2-1, 10 KO’s), taking home the interim WBC female light welterweight title. Svensson held the WBC silver title in the same weight class, but had not made a defense since winning the title in February of 2013. She also held the WIBF and WBF Intercontinental titles in prior years.

Marie Riederer was unbeaten in her previous 11 bouts, and came in as the reigning WIBF light welterweight champion having won the vacant tile in October of 2012 and defending it once in 2013. Her only other defeat was a 2010 stoppage to now middleweight champion Christina Hammer.

In Argentina, at Estadio Deportistas Alvearenses, Marisa Gabriela Nunez (7-5-2) scored the biggest win of her career, upsetting former world light welterweight champion Monica Silvina Acosta (19-2-2, 5 KO’s) to win the vacant IBF light welterweight title. Acosta had a solid reign as the division champion, holding both the WBC and WBA titles making a total of nine successful defenses before suffering her first loss to Ana Laura Esteche in January. Nunez has had a checkered career thus far, but this win puts her at 3-0-1 over her last four outings.

Also on that card, in her second bout as a junior lightweight, former WBO and WBA super bantamweight champion Yesica Patricia Marcos (24-0-2, 8 KO’s) scored a fourth round knockout over Silvia Fernanda Zacarias (8-17-5, 1 KO). An odd ending, Zacarias was dropped by a left hook to the body, but was standing at the count of nine only to have the bout called by referee Javier Lujan. Zacarias looked confused by the call, but didn’t put up an argument over it. The two women had also fought in March, with Marcos winning a six round decision.

WBC featherweight champion Jelena Mrdjenovich (33-9-1, 17 KO’s) successfully defended the title in front of a hometown crowd. The Edmonton native scored a sixth round RTD over Marilyn Hernandez (25-10, 16 KO’s) at the Shaw Conference Centre in Edmonton, Alberta, Canada. The champ has now won five straight, and is 9-1 over her last 10 fights. This was her first defense of the strap since a win over Melissa Hernandez in May of 2013 earned her the title. She’s won three non-title bouts leading into this weekend’s defense. Marilyn Hernandez had never had much luck against upper level opposition, accounting for her 10 defeats but she did have a short run as WIBF super bantamweight champ after a win over Aniya Seki in 2011.