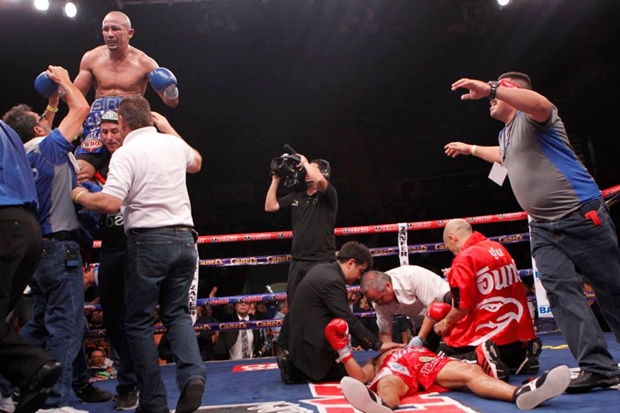 “…Sit back, watch this, and the next time someone says “boxing is in decline,” smack ‘em!” –Springs Toledo

Orlando “Seri” Salido (42-12-2) took on mini-bomber Terdsak Koketgum (53-4-1 coming in) for the interim WBO World super featherweight title and both men engaged in a war of epic proportions. This was shades of Lyle-Foreman and Cooper-Moorer all over again; this goes into my memory bank

Erlier this year, Daniel Eduardo “Tatu” Brizuela (25-2-2 coming in) who competed for Argentina in the2004 Summer Olympics in Athens, Greece, and Hull’s own Tommy “Boom Boom” Coyle (17-2) engaged in similar savagery . This one had it all: Blood-letting head butts, multiple fouls for hitting low and on the break, an intrusive referee, ebb and flow action, body shot knockdowns generated by hard Mexican-style hooks to the liver, a late round Froch-like attack, a last round rally, and 8 knockdowns in all—yes 8. It was as if someone decided to put all of the ingredients of different FOTY’s into one fight. See: http://ringnews24.com/world-boxing-news/item/13682-mayhem-in-hull-tatu-vs-boom-boom

In what was an extremely close fight going into the 12th and final round, Coyle finally closed the gap at the 1.07 mark when he hurt and then floored Brizuela with three rattling shots—the first being a crunching right that started the Argentinian on his way. A sweeping left finished the job. Upon rising, Brizuela seemed ready to continue, but referee Grey saw something in his eyes that said otherwise and waived off the action. Brizuela did not protest the stoppage
Mexico

“Orlando Salido knocked out Terdsak Kokietgym, which wasn’t an unexpected result. The path to get there, however, was incredible.“—Scott Christ

“Wow…Siri Salido took Kokietgym to the hottest depths of hell and left him there…what a performance!”— Paul Magno

“I loved every minute of this one! At its highest level, no other sport can produce this kind of drama!”—Hector Duarte, Jr.

Lo and behold, just when I figured that I had the Fight Of the Year all set for 2014, along come the Thai warrior and the fan-friendly Salido who wasted no time in going into a two-way rock’em’ sock’em mode. Salido was floored in the first, second, and fifth rounds, while Terdsak was down in the first, fourth, seventh, and eleventh frames. Unlike most Thai fighters, Kokietgym, who lived up to his nickname “Pit Bull,” is willing to work outside of Thailand, but when he does, the results are seldom in his favor.

Referee Eddie Claudio messed up at the end of the sixth thinking he had heard the bell. That led to Salido prematurely celebrating, thinking he had gotten a stoppage. After the seventh stanza, Siri took control and finally sent the valiant Thai to Pattaya Dreamland with a series of crunching shots.

Salido is a slow starter who gets better as the fight progresses. While he frequently finds himself on the canvas, he is incredibly resilient and always seems to weather the storm and get back into the action. Against Mikey Garcia, he was down 4 times (though he was coming on at the end), and was nearly knocked out by Juan Manuel Lopez in their second match. Filipino Weng “Baliangao Thunder” Haya had him down twice before being waxed in 2011. In 2010, Yuriorkis Gamboa had him on the floor twice on his way to a UD victory. In March 2014, Vasyl Lomachenko came very close to ending matters in the last round but ran out of time.

Here is the footage for the full fight: https://www.youtube.com/watch?v=E-gq9SQL1zA

Here is the footage for the highlights: https://www.youtube.com/watch?v=NidrtJmwdms

Perhaps because the fight in Mexico had more riding on it, it may get the nod for Fight of the Year over Coyle vs. Brizuela or other contenders.