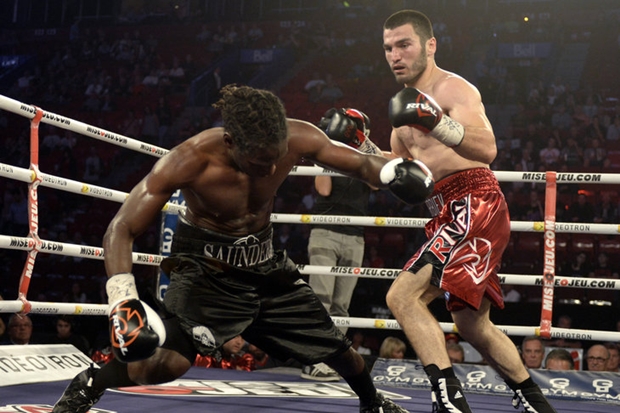 Bell Centre, Montreal, Quebec, Canada– Up until now, fans and media could be forgiven if they withheld fawning praise for Russian amateur star Artur Beterbiev (6-0, 6 KOs). After all, the first five opponents of his professional career held a combined 75-88-8 record. After Saturday night, though, it might be safe to start cranking up the bandwagon.

After looking like a fighter who may have bitten off a bit more than he could chew in the first two minutes of the first round, a bull rush on Cloud and several thudding “one hand free” punches on the inside would drop the former world titlist at the forty-five second mark and lead to two more knockdowns before the end of the round.

Beterbiev pounced on Cloud at the beginning of the second and battered him mercilessly against the ropes. Cloud would fall again, this time at the thirty second mark, and stay down for the full ten count. This is Cloud’s third straight loss.

The 29-year-old Beterbiev is being positioned as the next big thing at 175 and the challenger to the ultimate winner of the Hopkins-Kovalev-Stevenson dust-ups.