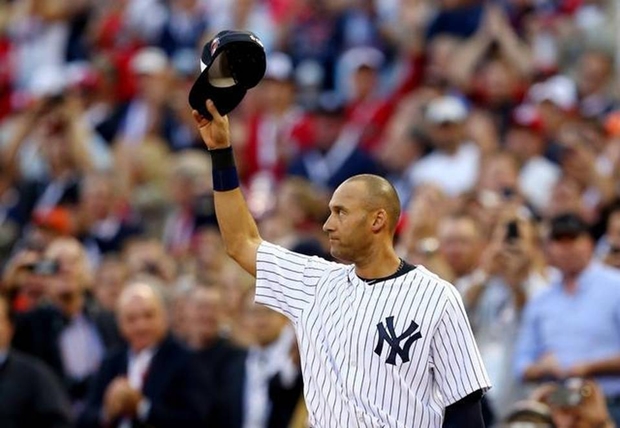 Bottom of the ninth, 2 outs, guy on 2nd. “Now batting for the Yankees, number 2, Derek Jeter”

Fast ball, outer corner. In classic Jeter form, he sat on it and smacked through the right side of the infield. As the right fielder gobbled it up and threw a strike to the plate, the world froze for a second…. SAFE!!!

Jeter walked off the field a hero, a living legend. With a series left in Boston, Jeter declared he will only DH. Meaning, we have probably seen Jeter take the field for the final time.

John Elway and Ray Lewis rode off into the sunset with championships. However, there was no Gatorade farewell commercial. Number 23 didn’t tip his cap to them. Which brings me to my question, why don’t we see fighters leave at the peak of their careers?

If Mayweather decides to honor his word and retire next year, undefeated, it will be a scene we rarely see in professional boxing– A hall of fame fighter walking away in his prime, perfect record intact. Rocky Marciano and Joe Calzaghe, that’s it.

Lennox Lewis walked away, still the champ, but with controversy. However, we as boxing fans, usually see champions like De La Hoya getting bullied by a smaller fighter. Ray Leonard was embarrassed by Hector Camcho in a fight he should have never been in.

We watch painfully, in sorrow, as our favorite fighters, Tyson, Holyfield and Jones Jr, hang on for too long.

Yet that’s the sad thing about the sweet science, your last check is your best check.

Jeter’s 2014 salary is far less then his 2010 salary. However, barring an injury in the off season, he could still lace em up next year. He could still hold down the middle infield and bat .270. He just can’t do it to his personal standard.

Boxers always believe they have that one last great performance left. And sadly, in most cases, they’re mistaken.

Hopefully, Bernard Hopkins wins his bout against Sergey Kovalav, learns from a class act like Derek Jeter, and calls it a day.