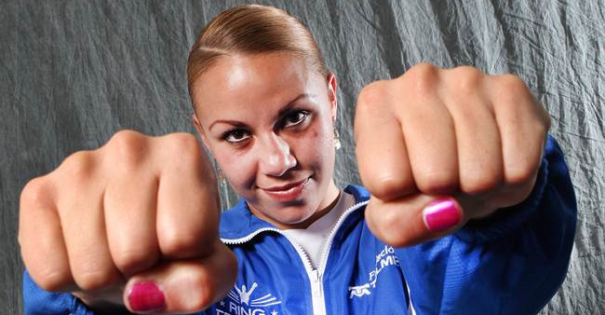 A seven bout card at the Hotel Gran Riviera Princess in Playa del Carmen, Quintana Roo, Mexico wrapped up the first ever WBC women’s boxing convention in Mexico. Fighting on the card was WBC super-flyweight champion Zulina Munoz (43-1-2, 27 KO’s), making the seventh defense of the title against the lesser experienced Karina Hernandez (5-1-3, 1 KO). The two fought clean at ring center for 10 rounds, the champion’s height and reach advantage making the difference as she mounted her offense behind a stiff jab which in turn allowed her to outland Hernandez who just couldn’t get inside often enough to land any damaging shots. The challenger was simply out-boxed in a contest that saw Munoz take a 98-92 (twice) and 97-93 unanimous decision. *Boxrec doesn’t list this contest as a title defense, but the WBC website does.

According to the WBC website, Munoz will face WBC International super flyweight Champion Mariana Juarez (40-7-3, 17 KO’s) in a mandatory defense of the super flyweight title. The date is yet to be determined by the promoters, but word is that Juarez already has a November bout planned against WBC/WBA super bantamweight champion Jackie Nava (30-4-3, 13 KO’s). Juarez is also looking to avenge a loss to Ava Knight (12-2-3, 5 KO’s) who beat her in 2012, costing her the WBC flyweight title.

Stateside, at the ABC Sports Complex in Springfield, Virginia, WIBA welterweight champion Tori “Sho-Nuff” Nelson (11-0, 3 KO’s) headlined the show with a title defense against Arlene Blencowe (2-3), a former WIBA light welterweight and WBF welterweight title holder . This was the fourth title defense for Nelson, who’s also been WBC and WIBA middleweight champion, and it wasn’t easy despite the edge in experience over the challenger. Nelson managed to walk away with a split decision win by scores of 96-94 twice, and 93-97 in favor of Blencowe. It was the second close loss for Blencowe, who came in off a one point loss to undefeated Sabrina Ostowari for the Australia lightweight title earlier this year. Nelson is scheduled to make another defense in November against an opponent to be named.

WBC lightweight champ Delfine Persoon (30-1, 13 KO’s) fought a non-title contest in Belgium, taking an eight round shutout over Judy Waguthii (13-7-3, 4 KO’s). Also holding titles for the WIBA, WIBF, and WBF, Persoon now has a 21 fight winning streak, last losing to Zelda Tekin in 2010. She’s scheduled to defend the WBC title against WBC super featherweight champ Diana Prazak in November. Waguthii has yet to win a title contest in five tries.