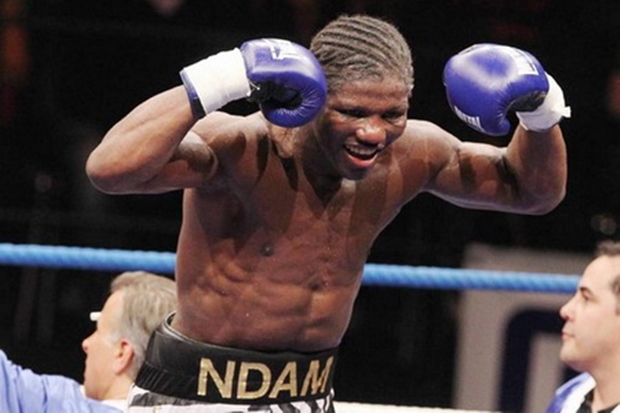 Barker Hangar, Santa Monica, California– Former middleweight world titlist, Hassan N’Dam N’Jikam (31-1, 18 KOs) is one step away from becoming a current titlist as he made relatively easy work of heavy-handed knockout king, Curtis Stevens (27-5, 20 KOs) via unanimous decision on Wednesday. With the victory, he becomes the IBF’s no. 1 contender to the title currently held by Australia’s Sam Soliman.

The IBF eliminator between N’Jikam and Stevens was being sold as speed vs. power and many were expecting Brownsville New York’s Stevens to eventually land something big to fracture the supposedly fragile chin of the fighter representing Cameroon by way of France.

Instead, though, the bout immediately took the form of Stevens’ embarrassingly poor performance against Andre Dirrell back in 2007 as he plodded after his more nimble opponent with virtually no success. Steven, as it was in 2007, seemed to lack any understanding whatsoever of how to engage an opponent not eager to be engaged and he gave away round after round to N’Jikam, who was taking the gifted rounds with little more than a few token jabs and some harmless straight right hands.

Not harmless, however, was the straight right hand from N’Jikam in the eighth round that dropped Stevens just as he was loading up for haymaker right of his own.

Aside from that moment, N’Jikam mostly cruised as Stevens trailed being him harmlessly. On the few occasions Stevens managed to land something substantial, he was immediately smothered by the former titlist and the temporary threat would be extinguished.

After twelve rounds, the judges’ scorecards read 116-111, 116-111, and 109-108– all for N’Jikam, who will now move on to face the winner of next Wednesday’s IBF title bout between defending champ Sam Soliman and former world champ Jermain Taylor.

Also on the ESPN2 telecast: