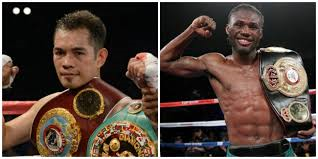 Donaire, once widely considered one of boxing’s top pound-for-pound fighters and the heir apparent to Manny Pacquiao as Pugilist King of the Philippines, is still looking to polish away the tarnish of a lopsided loss to Guillermo Rigondeaux. Since being dressed down by Rigondeaux, Donaire has looked less than the superhuman who put a dent in Fernando Montiel’s head and ran rip shod through the bantamweight and junior featherweight division’s outer realms. Against Vic Darchinyan last November, Donaire trailed on two of three scorecards before landing the big punch he searched for over the course of eight and a half rounds. And in his last trip inside the squared circle, Donaire’s struggles continued against Simpiwe Vetyeka before a cut brought about a fortuitous halt to the action, resulting in a technical decision win after the completion of five rounds.

Donaire is a boxer with many facets. On one side, he is a fighter with unnatural gifts; speed in his hands and feet, with power to match. On another side he is a fighter that easily fell in love with his press clippings, and in the process sunk into an unsettling pattern of abandoning the basics and throwing one big punch at a time, often sitting tightly coiled in wait of counter opportunities to present themselves. It is Donaire’s often fruitless pursuit of the memorable knockout that leaves him where he’s at today; struggling against fighters he should be dispatching with relative ease and looking quite gun shy.

Walters has been touted as a fearsome conqueror with ‘upset’ on his mind. That may very well be the case, as his knockout percentage is an impressive 83% and he is thus far undefeated. But the “Axe Man” from Jamaica, fighting almost exclusively on the Panamanian circuit, has yet to prove himself against a world class fighter still in or near his prime. The bright spot on Walters’ resume is a stoppage win over a faded and undersized Vic Darchinyan. Walters won his WBA belt in December of 2012, by way of 7th-round TKO over Daulis Prescott.

Despite possessing the tools that lead one to believe he’s capable of so much more, Donaire is at his best when he’s countering his opponent. He needs to be wary not to abandon his jab while in search of openings, as he’s prone to do. Donaire will have to utilize his jab to keep Walters from establishing a rhythm, and work angles to give his punches the added element of surprise. Walters is taller and longer than Donaire – a disadvantage Donaire doesn’t often suffer – and he can get in and out of range in a hurry. Walters has a habit of bringing his jab back low, which would leave an opening for a Donaire overhand right.

On paper this fight is just what the doctor ordered for Nonito Donaire. Walters will come forward and be aggressive. He likes to mix up his punches and throw them in bunches, which will leave him open to be countered. But the recent struggles of Nonito Donaire, combined with the added responsibilities of fatherhood and the natural degradation of his reflexes and athleticism, have left behind a fighter with the look of someone with one foot out the door. And that could spell trouble against a fighter with unverified power, looking to make his mark and prove himself against the top of the class.

A lot is on the line on Saturday night. Provided an aggressively compliant Nicholas Walters, we could see vintage Donaire catch a wild-swinging Walters with a huge counter punch and end their affair early. With a hesitant and defiant Walters, Donaire’s Hail Mary left hooks and chopping overhand rights will likely prove little more than satisfactory means to secure another apathetic decision victory for Donaire. And there’s always the possibility that Walters is the real deal/next big thing at featherweight, and delivers another blow to Nonito Donaire’s flagging career as a world class boxer.

The most likely scenario is the second; we’ll see Donaire posture nervously in between wild, lunging hooks thrown at a hesitant Nicholas Walters, and at the end of twelve action-starved rounds Donaire takes the win in comfortable, yet unattractive manner.