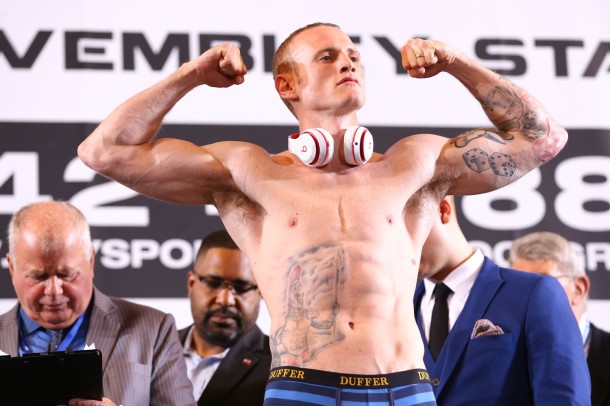 George Groves (20-2, 15 KO’s) will defend the WBC silver super middleweight title on the under card of the rematch between Nathan Cleverly and Tony Bellew November 22nd in Liverpool. He’ll be facing Denis Douglin (17-3, 10 KO’s) of New Jersey, USA. A win would pave the way for a world title bout against Anthony Dirrell; Groves became the number one challenger for Dirrell’s WBC world title when he defeated Christopher Rebrasse at the Wembley Arena last month.

It’s a high risk contest for Groves, who will lose his mandatory position if Douglin beats him, but as Groves told BBC Sport, “it’s a few more rounds in the bank before I go after the ultimate goal of a world title.” The plan is to beat Douglin, then get the Dirrell contest in the U.K. early next year, “If we can’t agree terms with Dirrell’s people, we’ve got a purse bid situation in December so that’s going to take place in Vegas. We are going to head out there, try to win the bid and bring the fight to London. Hopefully if all goes to plan, we’ll be challenging for a world title on British soil around February, March, April time.”

Aside from his current status as the EBU and WBC Silver super middleweight champion, Groves is also a former WBA Inter-Continental, Commonwealth (British Empire), and BBBofC British title holder as a super middleweight. His two losses came against Carl Froch as an IBF and WBA world title challenger; he was stopped in both bouts.