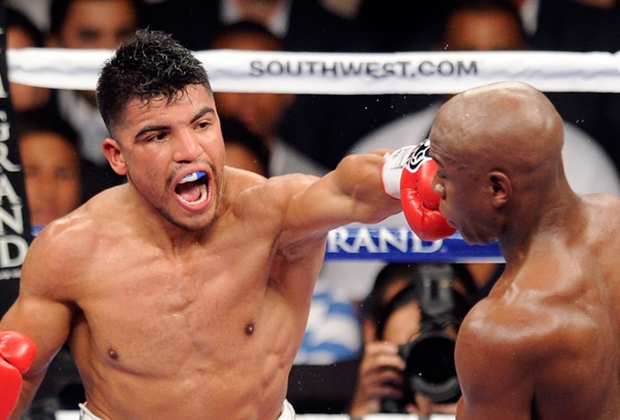 Former world titlists Victor Ortiz and Abner Mares have been added to the undercard of the December 13 Las Vegas Showtime card headlined by Amir Khan vs. Devon Alexander.

Ortiz (29-5, 22 KOs), who was knocked out in two rounds by Luis Collazo in January of this year, is looking to get back into the mix in the welterweight division. But with no wins since beating Andre Berto for the WBC welterweight title in April of 2011 and only two rounds of ring action since June of 2012, it will be an uphill battle to get Ortiz back near the top of the division. At 27, though, there is still a remote possibility of turning Ortiz back into a bankable property and one can be pretty much guaranteed that several soft touches will be lined up for the talented, but so far underachieving welterweight. Ortiz’s opponent for the December 13 card has yet to be announced.

Mares (27-1-1, 14 KOs), whose opponent is also unknown as of this writing, has less to overcome than Ortiz, but is still looking to shake off the negative buzz coming from his first round knockout loss to Jhonny Gonzalez in August of 2013. In his last bout, in July of this year, Mares scored a decisive ten-round unanimous decision over a tough Jonathan Oquendo. The 28-year-old Mares is a former three-division world titlist, right now toying with either a stay at featherweight or a move up to the less demanding super featherweight division.

The other bouts on this Showtime card are Demetrius Andrade vs. Jermell Charlo for Andrade’s WBO junior middleweight title and Keith Thurman vs. Leonard Bundu in a welterweight clash of undefeated contenders.