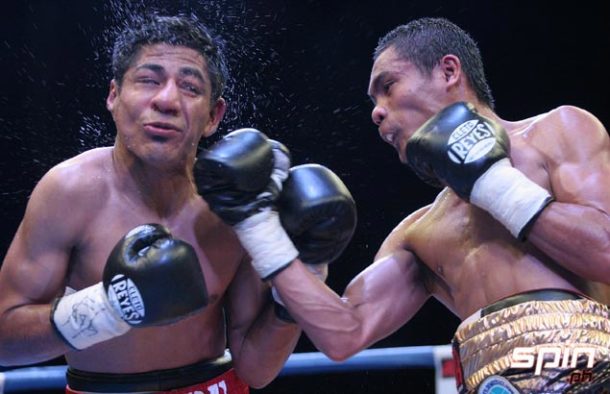 This is the headlining bout on Thursday night’s Golden Boy Live card; Diaz is a 2012 U.S. Olympian and Castaneda has become a stepping stone opponent to rising prospects the last two years.

This is Cuadras second defense of the WBC super- flyweight world title.  He’s coming off a technical four round draw with Jose Salgado in September while Mabait fought in March and was knocked out by Alejandro Hernandez.

This is Salkas first bout since being Danny Garcia’s sacrificial lamb in August.  The FECARBOX lightweight champ faces Meza-Clay, a regular on the Pennsylvania circuit with an eight fight winning streak.

Known as “The Hammer”, Lubin is being touted as a rising star in the welterweight division.  He takes a step up against Gonzalez, who has the edge in experience, but comes in off three straight losses.

A regular on the Virginia circuit, Lange was a contestant on the first season of “The Contender” in 2006 where he lost in the opening round, but returned as a “fan favorite” to defeat Tarik Salmaci.  He’s a former USNBC and NABA light middleweight title holder; this is his first fight in over two years.  Jeter is the Virginia State and FECARBOX middleweight champ; he defeated Lange in 2012 over 10 rounds even after losing four points due to fouls and being knocked down.

Nietes is riding a championship reign that’s lasted over seven years.  After winning the WBO minimum-weight title and making four successful defenses, he moved up to light flyweight in 2011 and won the WBO light flyweight title which he defends for the fifth time against Velarde.  Velarde is the current IBF Latino minimum-weight title holder, making the jump in weight for a shot Nietes’ world title.  In a prior world title contest he was stopped by Ryo Miyazaki in five rounds.  This bout headlines “Pinoy Pride 28”.

If this fight will go on as scheduled is anyone’s guess, but if it does, it will be the fourth consecutive meeting between the two.  Neither has fought outside of Yemen, but Maz does hold the honor of being the only fighter to take Raymi past the first round in two of their three match ups.