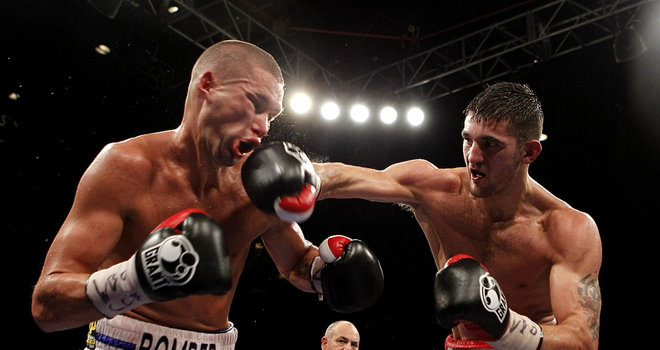 Nathan Cleverly (28-1-0, 14ko) and Tony Bellew (22-2-1, 14ko) add another chapter to their bitter rivalry on Saturday, November 22 in the latter’s backyard at the Echo Arena, Liverpool, topping a bill that includes a number of marquee names – Anthony Joshua, George Groves, Callum Smith and James DeGale – with mismatched opposition.

Unlike the bulk of the pay-per-view undercard, Cleverly and Bellew should be a competitive duel. The pair, whilst perhaps a rung below ‘elite-level’, are two of the best in their weight class in Britain and though the Welshman convincingly defeated Bellew in a light heavyweight world title defence three years ago, the fact both are now operating at cruiserweight adds an element of intrigue to the encounter.

As does the fact that Cleverly appears to have taken to the weight in a superior fashion and is the calmer of the two combatants. Bellew appears to have wound himself up – again. This contest means far more to the home fighter. During the build-up he has been dismissive to a staple of British boxing reporting – Steve Bunce – and has probably lost a number of ‘casual’ fans thanks to his playground bully-like antics. It just comes across as a bit… cringe.

Their media demeanour means little once each man gets inside the Merseyside ring. And each man will feel like he has a point to prove.

For Cleverly, a former world title holder with the WBO, he will want self-belief. His confidence was rocked after getting dropped twice then stopped inside four rounds when hosting Sergey Kovalev in Cardiff, but bounced back with a brace of swift stoppages over Shawn Corbin and Alejandro Emilio Valroi, both at cruiser.

For Bellew, he wants revenge. Cleverly took his ring virginity. Popped the cherry on his loss column and will be looking for payback. But he too is also mid-way through rebuilding after Adonis Stevenson dominated him at 175-pounds in Quebec 12 months ago. Since then, he has triumphed over Valery Brudov and Julio Cesar dos Santos.

Both fighters take no second invitation to remind the press about their one great advantage heading into this, or any, fight.

For Cleverly, it’s his athleticism – something Bellew thinks is tosh: “Boxers win fights, athletes do not win fights.” And, indeed, for a big man, Cleverly’s ability to constantly throw punches is bunches is commendable. For a fighter who does not possess true, one-punch power, a swarming fighting style can be effective in keeping an opponent at bay. Unless of course the man in front of you is nicknamed Krusher.

Bellew, meanwhile, is enamoured with his punch power. Whilst good at a domestic level, who has Bellew concussed at European or his few forays at world level? He has swapped shots with Stevenson, Isaac Chilemba (twice), Roberto Bolonti and Edison Miranda, but only stopped the latter. Bellew has also, obviously, already once challenged Cleverly before – and not once did he rock him, even though Kovalev showed it is possible.

There is no title on the line in this dust-up, but with Marco Huck expected at ringside, the winner will likely go on to compete for world honours against the Cap’n on a joint Matchroom Sports and Sauerland show, probably in Germany.

For me, it will probably be Cleverly. Again. (On points).