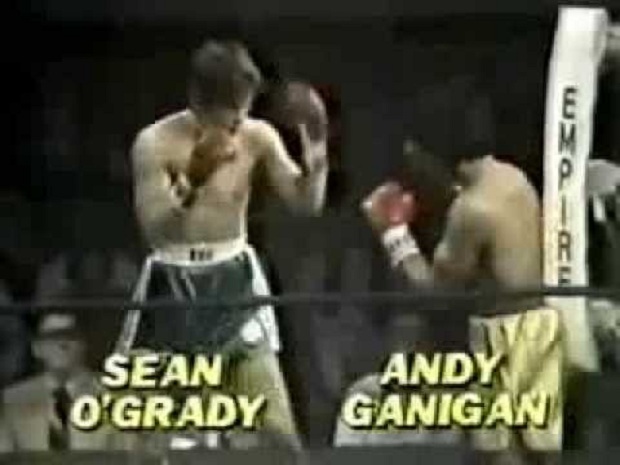 “Some felt Pat O’Grady, a former Marine who fought on Okinawa and Guadalcanal, was trying to control his son, strip his entire personality by forever dictating to him and making sure he followed his directives.”— Brian D’Ambrosio

“My father was doing everything possible to help me and help me win. Dad never had another job. We moved a lot, we were vagabonds, we had no money, we were struggling, and he wanted to make it go well.” –Sean O’Grady

“…this was on network TV back then. O’Grady was still highly-touted, and a former champ who was recently stripped of his title. After that fight, Ganigan had an aura of a brutal puncher who came out of the unknown.”—Rick Scharmberg

Sometimes muggings take a while to unfold and above all, they rarely unfold at locales such as the Convention Center in Little Rock, Arkansas, but this one did in October 1981 and it was memorable.

These were two of the best. Unfortunately for “Bubblegum” Sean O’Grady the free swinging mini-bomber Andy Ganigan was a late substitute for Howard Davis Jr who would have been far better suited for O’Grady, style-wise.

The first round was an exciting give-and-take as was much of the early part of the second. In fact O’Grady was showing some solid technique and sharp combos. But then, out of the blue, Ganigan floored Sean by two crunching left hands. Then, another left floored him in a corner and he was badly hurt.

Incredibly, Sean rallied until he was floored for a third time by a withering left hook to the side that left a deflated O’Grady prone for several minutes.

And just like that, “The Hawaiian Punch” won the renegade World Athletic Association (WAA) lightweight title. Sean’s father, promoter, and trainer, Pat O’Grady, created the organization on his own. But this is another story for another day.

Here is the video: https://www.youtube.com/watch?v=G8MD9lIITv8

In his last outing in 1983, Sean was again badly mugged by John “The Heat” Verderosa who caught Sean in the fourth and ended his career with two rattling knockdowns.

Verderosa himself was the victim of a vicious Atlantic City blowout from Cornelius Boza Edwards in April 1982. This upset may have done permanent damage to the undefeated “Heat.” Here it is: https://www.youtube.com/watch?v=76Xi2GE3xOI.

In a tragic twist of fate, the popular Andy died two years after an apparently drunken and unprovoked attack on March 26, 2010. He was 59. A witness told police she saw a 6-foot, 290-pound, barefoot, shirtless, man throwing repeated punches at the 5-foot-6, 160-pound Ganigan before two other men pressed him against a glass panel and instructed him to “stop already.” The man told police he was drunk and did not remember anything. Since the assault, Ganigan was under 24-hour care