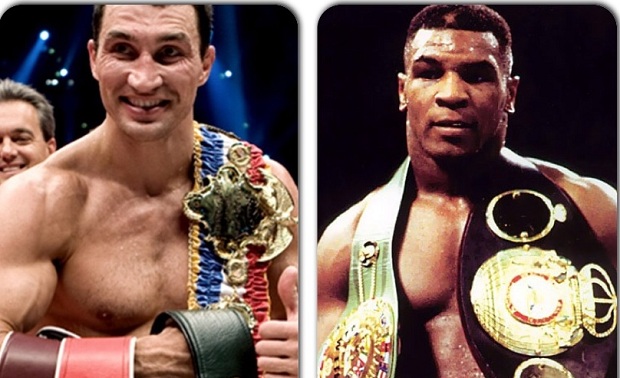 Until it’s determined whether or not Deontay Wilder and Bermane Stiverne are good enough to possibly dethrone Wladimir, there just isn’t a match-up worth discussing. In this mythical matchup, I pit two of the most accomplished heavyweights of any era together for a unification mega fight.

I will use the 1997 version of “Iron” Mike Tyson. In 1997, Tyson was the most feared human on earth. His mixture of speed and power had never been seen on this level before, nor after. With a head-bobbing defense and a sturdy chin, Tyson was perceived to be unbeatable. Tyson was Ali mixed with Mayweather, a cosmic force that comes once in a lifetime.

Klitschko is a dominant force in today’s heavyweight division, having not lost since 2004. Over that span, he’s complied a 21-0 record with 18 straight title defenses. At 6’6, 260, Klitschko is a monster capable of winning a fight, solely with a jab. With maturity, he’s become a complete, possibly, all-time great.

Marketability? One word, Tyson. Tyson is the example of all press is good press. He was a one man PR gold/nightmare, all wrapped into one big-selling package. Tyson was PPV before PPV was popular. In a total of 9 PPV’s, he totaled 12.07 million buys. Klitschko would only have to show up to the initial press conference and the weigh-in and your looking at 2 million PPV’s.

Kiltschko has become a master at using his jab to keep his opponents at distance. His ability to create distance while drilling you with a right hand when you got close, has taken him to the top of the heavyweight division. With a staggering height and reach advantage, would Klitschko be able to fend off the feisty Tyson?

Pre Douglas, Tyson was a maniac, fierce and destructive. He had no problems dealing with taller fighters, defeating 6’5 Tony Tucker for the IBF Title. If Tyson wasn’t knocking you out, you were in survival mode until the final bell. Would Tyson be able to break through the guard off Klitschko and touch his “soft” chin.

The magnitude of this event would generate record type numbers. At the height of Tyson’s reign, he would surely be the favorite. The MGM Grand would be rocking with celebrities like Magic Johnson and Arsenio Hall. Remember, this was pre-Tupac, Tyson.

I’ll probably be in the minority on this one but I see Tyson, catching, and stopping Klitschko inside of 6 rounds. Feel free to chime in with your opinions