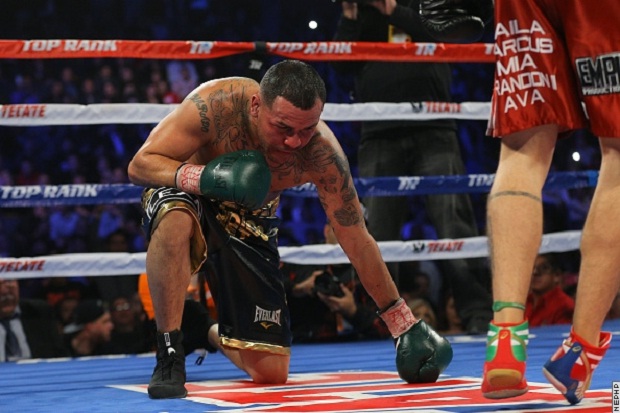 I guess I was one of the few people not all that disappointed with last Saturday’s Brandon Rios-Mike Alvarado rubber match. Unlike many, who were expecting an all-out war of attrition in keeping with their two prior bouts, my expectations were a lot lower. Coming into the bout, I felt strongly that Mike Alvarado was a dangerously shot fighter, right on the verge of a truly career-ending beating and that Rios was the perfect guy to deliver it to him.

The evidence was there in training videos posted online, showing Alvarado struggling to keep his balance, even in a simple shadow boxing routine.

The 34-year-old Alvarado was coming into this Rios tie-breaker after six consecutive tougher-than-tough fights and three losses out his last four contests. You could probably point to the Ruslan Provodnikov fight in 2013, where Alvarado was forced to quit on his stool in front of his hometown fans, as the beginning of the end for him. But yet another beating followed, this one at the hands of Juan Manuel Marquez via one-sided unanimous decision.

And then there was Alvarado’s life away from the ring.

Full of drama and strife, the Denver-based fighter came into this last Rios fight with gun charges and possible prison time hanging over his head.

On Saturday, just outside of Denver, Alvarado was battered from pillar to post and never really put up much of a fight against Rios this time. After three rounds, he would quit on his stool in front of his hometown fans once again.

The crowd response was predictable as boos and insults rained down on the fighter and his team. The criticism became even more intense when Alvarado admitted on the HBO post-fight interview that he had simply not prepared properly for the bout and got what he deserved.

A smart corner would’ve muzzled Alvarado, taking him back to the dressing room to clear his mind and treat his wounds. Instead, his people argued with ringside hecklers and made matters worse by allowing an obviously dazed fighter, at likely the lowest emotional point of his career, to take the mic on nationwide TV.

Fans and media have not been kind to Alvarado in the days following the loss. Once a regional hero, Alvarado is now a target for derision.

On one hand, you can understand the displeasure of the fans, who spent their money to see a thrilling fight of the year war and ended up watching the equivalent of a bunny tossed into helicopter blades.

But, sometimes, boxing is a lot more complex than the real life Mortal Combat battles fans would like it to be.

Before destroying Mike Alvarado, ask yourself these two questions:

How many shot fighters are able to acknowledge that they are shot?

What would you do in the same spot, facing prison time and at the end of your career, knowing you’re ill-prepared for a fight– Deliver a stinker of an effort to the fans or bring in one last payday to take care of your family while you’re away?

There should be little doubt about it now– Mike Alvarado is done as a main stage fighter. He’s also made some poor choices in life that have accumulated over the years and may now cost him his freedom.

But before casting blame on the man for one singular poor performance in the ring, walk a mile in his shoes.

Any of us could be Mike Alvarado– a man being crushed under the immense pressure of his career and a tumultuous personal life who simply, one night, finally broke down completely. He erred on the side of bringing home one more major payday to his family and will now be on his own, facing a lifetime of insecurity. No more fan support, no more HBO paydays, no more star treatment. Now, the real pressure begins and for his sake and the sake of his family, here’s hoping he won’t break down again.