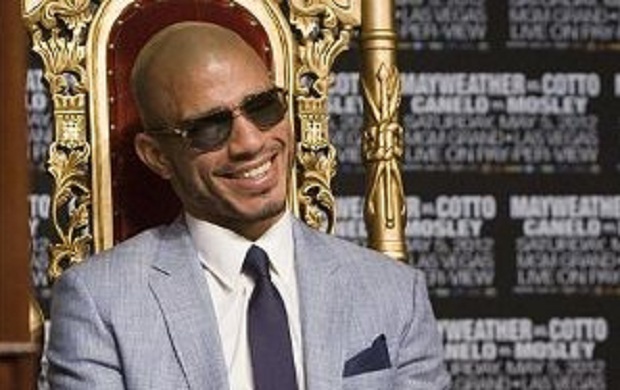 In a world of perfect boxing continuity, WBC and true lineal middleweight champ, Miguel Cotto, would meet his destiny and pass the torch to the best middleweight, Gennady Golovkin, in a winner-take-all contest to bring order to the division.

Except, Cotto and just about everyone who knows boxing understands that Cotto-Golovkin is less scrap and more thrashing machine slaughter for the Boricua battler. And while Cotto has walked into thrashing machines before, he’s not about to do it again, unless it’s for a Brinks truck full of money.

As a matter of fact, Cotto is all about money and the right match-up these days– and who could blame him?

For the majority of his career, Cotto has been the perfect boxing fall guy.

Bringing with him major drawing power as the heir to the Puerto Rican boxing throne, but saddled with the type of technical and tactical flaws inherent in a fighter essentially self-trained for much of his career, Cotto generated money and executed a nothing’s guaranteed crowd-pleasing style in his bouts.

This blend of attributes, along with the stoic Latino boxing facade he kept up throughout his career, allowed for the sport to get the better of him. The disrespect tossed at Cotto over the years has been a lesson for all those “good soldiers” in the sport who toe the company line and keep their mouths shut.

As everyone knows, in 2009 Margarito was found to be wearing hand wraps coated with a “plaster-like” substance prior to his bout with Shane Mosley. When people put two and two together, many put a big question mark over all of Margarito’s wins, most notably his brutal destruction of Miguel Cotto six months earlier and the grotesque manner in which he battered Cotto’s face.

Top Rank honcho and Cotto promoter, Bob Arum, spent most of the “Plaster Gate” scandal defending Margarito and denying the loaded wrap claims…at the expense of the feelings of the possible victim, Miguel Cotto.

Cotto sat back and remained the strong silent type, only occasionally giving voice to the anger he felt inside for the possible cheat and frustration of having his own promoter defend the fighter who may have, literally, stolen millions from him when his loss ruined the chance of a showdown with Oscar De La Hoya.

Then, after suffering a beating that may have been caused by an illegal substance and having his promoter turn his back on him, Manny Pacquiao jumps in and claims the glory that could very well have been his by knocking off Oscar.

Eventually, Cotto got the big money showdown he wanted, but with Pacquiao instead of the aging Golden Boy. But he found the deck stacked against him well before the opening bell even sounded.

Despite being the reigning champ, he was forced to give in to every one of Pacquiao’s demands, including an arbitrary 145-pound weight limit.

Then there was the indignity of Cotto being told to either put up his WBO welterweight title for the catchweight Pacquiao fight or be forced to vacate. When Cotto balked and threatened to walk, the WBO countered by making Pacquiao its No. 1 contender at 147, despite only one win as a welterweight, against an unranked De La Hoya.

Like it or not, Cotto had to put up his hard-earned title. When push came to shove, boxing (and his own promotional and management team) couldn’t or wouldn’t fight for his best interest.

While the blame for this weak negotiating falls squarely on Team Cotto, it should be pointed out that the intermediary, Arum, never once lifted a finger to argue on Cotto’s side of the table, despite having just lured Cotto to a two-year extension on his Top Rank contract with the big money promise of this fight.

After losing to Pacquiao, Cotto did well for himself in subsequent years– moving up to win a world title at junior middleweight, getting a measure of revenge in defeating a one-eyed Margarito, and losing a competitive tussle with Floyd Mayweather for his biggest purse to date.

A loss to light-hitting Austin Trout in December of 2012 after the Mayweather bout signaled, perhaps, the end of the line for Cotto– until the imploding business of boxing saved his career.

Following a year where HBO had lost Mayweather and had severed all ties with Golden Boy Promotions, the network was desperate to win back the services of the Puerto Rican star, who had fought his last two fights under the Showtime banner and remained a top draw despite recent losses.

They gave Cotto a ridiculous $2 million payday to beat ridiculously overmatched Delvin Rodriguez and then, apparently, Cotto got business smart.

Leveraging the Rodriguez win into a shot at middleweight champ Sergio Martinez, Cotto played diva throughout the excruciatingly long negotiations process, never failing to mention that he was the “A Side” in this contest despite Martinez’s status as defending belt holder.

And now, more than eight months after his shockingly easy upset over Martinez, Cotto is in no hurry to select his next opponent, despite a long line of fighters who would love to low-ball him into playing the fall guy once again.

Cotto has passed on a fight with rising Mexican superstar Saul “Canelo” Alvarez in a deal that could’ve reportedly brought him as much as $10 million. The reality is that Alvarez would be a tough fight for him and that one more brutal beating could, finally, put an end to a career that has already seen too many beatings.

Against Golovkin, a beating is guaranteed, but without the Canelo payday– so, forget that.

As a matter of fact, there’s no guaranteed low-risk big money fight anywhere at middleweight for Cotto and very few safe world class options even at junior middleweight.

That’s why Cotto has been sitting back and seeing how the Mayweather-Pacquiao talks play out. Despite rumors to the contrary, Cotto’s people have denied any talks taking place with Team Mayweather or Team Pacquiao. But it would be hard to pass up on a big money chance at redemption if either fighter comes calling.

The back-up option if nothing huge pans out appears to be a blown-up 154 lb. Timothy Bradley– a match-up that would be equal parts utterly meaningless and stylistically dreadful.

But Bradley is a NAME and NAMEs bring money. Bradley’s a natural junior welterweight, fighting at welterweight and handicapped with seven (or more) extra pounds. He also has just one stoppage victory– over a decrepit Joel Casamayor– in his last eight years as a pro.

It’s hard to imagine Cotto losing to Bradley and even harder to imagine Bradley being able to hurt Cotto. It’s also almost guaranteed to get a big ticket green light from HBO in the thick of an all-out assault against them by rival Showtime and the increasingly all-powerful adviser Al Haymon.

For Cotto, Bradley is the perfect low risk-high reward bout if nothing bigger comes along.

In the past, Cotto would’ve jumped at the chance to stop the rising star of Canelo and would’ve marched bravely, stoically into a hopeless battle with Golovkin. But Miguel Cotto has learned his lessons from a business that has used his own bravery against him. Now, and likely until he finally hangs up his gloves, it’s all about what’s best for him and his own bottom line.