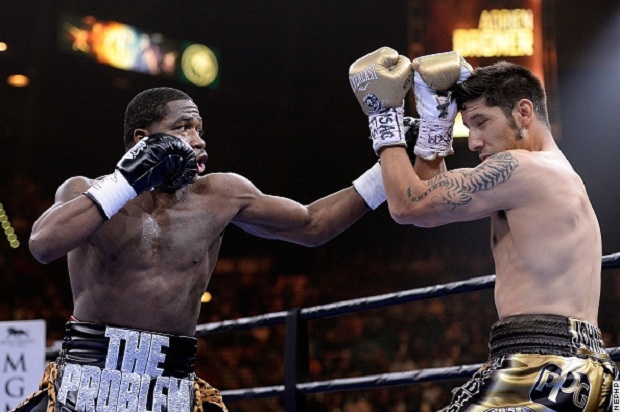 “The environment I’m in today, a lot of them were not on my side, but at the end of the day the last time I fought for the crowd I took my first loss. So, no disrespect to everyone that came to see me fight today, I had to do what I had to do to get my victory today.”
— Adrien Broner (post John Molina victory)

If only boxing were entirely about wins and losses. Guillermo Rigondeaux would be just as beloved as Gennady Golovkin and fighters could get through a tactical, in-ring chess match without hearing a deafening chorus of boos from the crowd.

Unfortunately, boxing is more spectacle than sporting event at this point. A series of dull, listless wins will do less for you than a handful of spectacular losses.

Unlike the PPV and premium cable business models, where fans actively choose who they support with their money, the network TV game is all about enticing a free audience with the quality of the programming provided.  Things like ratings have to be watched closely and you can be sure that the suits behind the scenes at Premier Boxing Champions are watching who brings in the numbers, who keeps those numbers growing, and who loses viewership over the course of a bout.

All of the details aren’t in regarding the ratings for Saturday’s PBC debut on NBC, but it’s hard to imagine that numbers grew during the increasingly uneventful Adrien Broner-John Molina TV opener. And even if they did, it’s equally hard to imagine that anyone will be coming back to see either fighter on future cards.

Both Broner and Molina showed an appalling lack of awareness in the ring Saturday night. They fought with zero sense of urgency throughout twelve long rounds– Broner unwilling to put in the effort to close the show and Molina reluctant to risk it all in pursuit of a win.

What was, on paper, a good pairing of the vulnerable speedster against the blue collar battler turned out to be a case of the disinterested boxer vs. the deflated journeyman.

Broner came right out and admitted that he didn’t want to take any risks on Saturday and was happy with his victory. Molina, on the other hand, essentially blamed his poor performance on Broner not sitting still.

Neither fighter, though, made even the slightest case for receiving another big-time spotlight or accompanying big-time payday. Molina walked away with a very generous $450,000 for his twelve-round exercise in quiet resignation. Broner took home $1.25 million for his prime time game of keep-away.

Under this new network business model, even the always-dense Broner will learn that winning is just half the job– and not even the most important half. One could explain away Molina’s poor performance as merely a case of not being good enough. Broner, on the other hand, has no excuse for settling on cruise control in what was essentially the biggest bout of his career.

From the first exchange in the first round, it was clear that Broner could hit Molina at will and pretty much do whatever he wanted. As time went by, the good vibe coming from Broner showcasing his natural ability gave way to frustration as it became apparent that he was more than content to hold back and give to us as little as humanly possible. Even color commentator Sugar Ray Leonard could contain himself no more and urged Broner to close the show as the seconds started to wind down.

Sugar Ray knows how little proficiency means in boxing without perceived passion. It’s literally the difference between success and stardom.

For Broner, unless he puts it all on the line the next time he gets coveted network air time, it could be the difference between NBC and Spike TV.