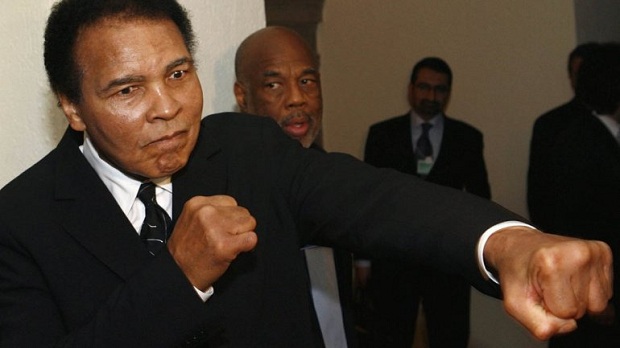 As the long anticipated mega-fight between Floyd Mayweather and Manny Pacquiao approaches, celebrities within and outside the boxing world have begun to weigh-in on which fighter they will support come May. There are few opinions on the matter more valued than the legend himself, Muhammad Ali. Known for his own monumental bouts throughout his illustrious career, Ali joins the wealth of notables picking sides for the mega-fight in early May.

Rasheda Ali-Walsh, Muhammad Ali’s daughter, revealed Ali’s allegiances in an interview with TMZ explaining, “My dad is Team Pacquiao all the way!” It comes as no surprise Ali is supporting Pac-Man due to the well-known friendship shared between to two former world champs. Rasheda explained her legendary father really likes Pacquiao and is a huge fan of both his renowned fighting skills and his work outside of the ring. Pacquiao’s well-documented philanthropy partnered with his humility have drawn millions to his corner of support. It was reported Pacquiao suggested the historic bout be held for charity during the many discussions attempting to ensure this long anticipated fight occurs but this selfless idea clearly never came to fruition as the bout in May will be the most lucrative fight in the history of boxing, with a $250 million purse.

Aside from their friendship, Ali and Pacquiao seem to share very few similarities especially when comparing their personalities and fighting styles. Ali is widely-known for his showmanship and unforgettable sound bites. Humility was a term rarely used to describe the former World Heavyweight Champion; Pacquiao on the other hand is synonymous with humility. It is Pacquiao’s rival, Floyd Mayweather who many would consider more similar to Ali during his glory days. Ali’s daughter disagrees with the Mayweather-Ali comparisons, though, stating, “My dad stood for things. Mayweather…I don’t think there’s a comparison.” Mayweather, who sat atop Forbes’ 2014 list of the world’s highest-paid athletes, has been known to frivolously spend his fortunes while Pacquiao uses his wealth to give back to his home-country of the Philippines.

It seems Ali’s age has brought about a change in what he sees as valuable in terms of a boxer’s presentation. Ali joins a list of notable Pac-Man supporters including super-star sports personality, Tim Tebow, another famous athlete known for his philanthropy. Mike Tyson, possibly the only person whose opinion holds as much weight as Ali’s, has yet to back a fighter publicly but did release a video explaining Mayweather will lose to Pacquiao if he doesn’t adjust his tactics.

Despite Tyson’s valued opinion of Mayweather’s susceptibility, bookmakers with Gambling.com favor Mayweather at 4/9 odds to beat Pacquiao. Unfortunately for Pacquiao, support from notable celebrities can only build his confidence but hold no weight in the ring. Pacquiao is hoping his age and recent defeats won’t factor into this long-awaited bout with his rival and he can emerge victorious.