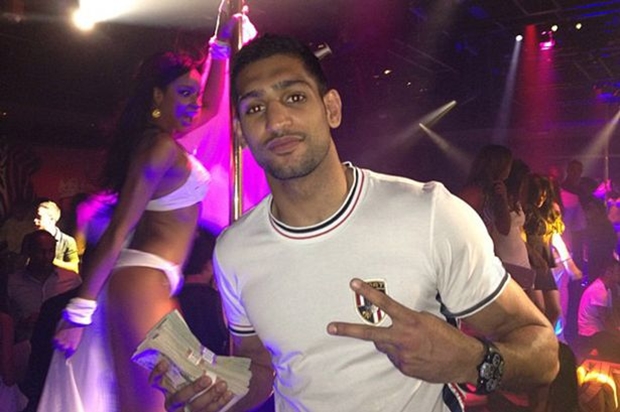 So much about boxing is subjective and it’s this aspect of the sport that leads to double standards galore.

If, for whatever reason, you have an agenda against a specific fighter, a case can be made for him ducking and dodging his mightiest competitor en route to the top. And this is a safe finger to point because everyone at or near the top has left behind at least a name or two that, for whatever reason, never made it the opposite corner.

There was plenty of outrage earlier last week when it was rumored that Chris Algieri could be Amir Khan’s next opponent. But, from a business perspective, this would actually be a brilliant choice.

The light-hitting Algieri was hyped up to be a hard-battling scientific genius-philosopher-heartthrob by the Top Rank Promotions publicity machine in the lead-in to his bout with Manny Pacquiao last November. Six-knockdowns and one embarrassingly one-sided decision later, Algieri returned to being who he is– a second tier boxer who does some things well, nothing exceptional, and, minus some scoring hocus pocus, is no threat to beat any high-end fighter.

But because he was in the spotlight for that brief moment before the Pacquiao fight, his name still carries some weight. Post-Pacquiao, a line was forming to feast on Algieri’s remains. Khan, because of the payday he can generate and because of his own liabilities in the ring, made sense for Algieri.

And for a guy like Khan, with Mayweather-Pacquiao aspirations, why would he not take on the fluffy creature of pure Bob Arum manufacturing? Fans will be angry because Khan reportedly passed up on a bout with Tim Bradley in order to take on Algieri, but the fans aren’t the ones risking a possible 5-7 million dollar showdown with the Floyd-Manny winner.

At the moment, there are no divas more capriciously selective than Miguel Cotto, who has refused to even acknowledge the threats of Gennady Golovkin and Saul Alvarez in favor of possible opponents Daniel Geale and K9 Bundrage.

But Cotto gets a free pass when it comes to his “selective” matchmaking choices because of a career full of ass-kickings and tough match-ups. Still, more and more fans will grumble as they realize that Miguel Cotto is in the money-making business now and is no longer interested in getting beaten up for the public’s pleasure.

Frankly, most fighters with an eye on making this sport a long-term endeavor are more about making money than pleasing the fickle fans. But Lord help those fighters when the truth is leaked to the public.

Suddenly, the talented 26-year-old, who was regarded by most as one of the best offensive fighters in the game, went from hero to chump. His resume was trashed and, by the time the media and dedicated fan trolls got through with him, it looked as though he had been fighting nothing but tiny hobos and drunken midgets throughout his career. Of course, that’s not the case– despite the quality of his last two opponents being very, very hard to defend.

And while we’re talking the Santa Cruz-Al Haymon recent path of least resistance, let’s just acknowledge the fact that 2014 was probably a year where Haymon and crew did their best to intentionally avoid even the slightest hint of risk.

Now, in hindsight, we see that 2014 was contested with a huge PBC boxing deal and a lot of money hanging over everyone’s head. Haymon needed his stars to make it to 2015 and that meant that guys like Danny Garcia, Adonis Stevenson, Leo Santa Cruz, Keith Thurman, Adrien Broner, and Peter Quillin would be kept nice and safe until they could step into network TV deals.

Fans and media grumbled throughout the year and bitched about Haymon’s negative influence on the sport, but it made perfect business sense. And nobody out there with an ounce of common sense and so much money on the line– not fans, media, or industry enemies– would’ve done anything different.

The price to pay for this smart business approach, however, is steep.

Gary Russell Jr., who still suffers a backlash for a career built on mismatches and soft touches, is so reviled that even scoring an impressive TKO 4 over Jhonny Gonzalez in March has brought little due respect. Rather than offer Russell a sliver of redemption, Gonzalez was made out to be a washed-up presence with overrated punching power ripe to be picked by a Russell, who really didn’t do all that much, anyway.

Saul “Canelo” Alvarez is still grasping for respect after getting tagged with the “manufactured champion” label early in his career. In his last four fights, the Mexican star has beaten tougher-then-tough stylists Austin Trout and Erislandy Lara, he lost to the world’s best fighter, Floyd Mayweather, and dominated one-time rabid perro, Alfredo Angulo– but respect is slow in coming. Even now, as he prepares to face James Kirkland on May 9, the critics are clearing their throats for a chorus of derision and excuse making should he win.

It seems that if you upset boxing’s code of machismo and don’t adhere to its manly fairy tale narrative, some fans/media will never forgive you. It may take Russell and Alvarez a lifetime of perfect performances to get any sort of respect and, even then, it might not be enough– just ask Floyd Mayweather.

Some fighters, on the other hand, are the wet dream products of frustrated masculinity and couldn’t garner negative press if they came to the ring in Nazi garb and dedicated the fight to all-mighty Lucifer.

Nobody questions the logic that has allowed Gennady Golovkin to bottom feed for the vast majority of his career amidst the ga-ga praise of a fawning media. Apparently, if the top middleweight refuses to fight “GGG,” that gives his team free reign to secure second and third tier opposition and/or fish for converted junior middleweights. Nobody also questions why an entity so determined to fight the very best is content fighting for a network set on allocating low-to-middle six figure paydays for opponents or for a management team pre-scheduling frequent fight dates in anticipation of not being challenged. Maybe Golovkin really does want to fight the very best, but it’s also quite obvious that nobody is balking at small, but easy paydays for a loving public that doesn’t seem to care all that much.

Sergey Kovalev, before proving his beastly awesomeness against Bernard Hopkins and Jean Pascal, fought his share of soft touches as well and was regarded as no less awesome by the fawning masses. Deontay Wilder was fighting Footlocker assistant managers and redneck bar bouncers until very, very recently. Juan Manuel Marquez is likely to cap off a Hall of Fame career with a cynical grab at whichever welterweight title that seems easiest to take.

Boxing is a business. Nobody’s favorite is exempt from this fact– not now, not sixty years ago. The risk vs. reward ratio is always considered when choosing an opponent. Hopefully, one day, we’ll grow up enough to realize that the only difference between a beast and a “duck” is good marketing and some old fashioned sleight of hand.

You can email Paul at paulmagno@theboxingtribune.com or simply sit back and watch as he outrages boxing nerds everywhere. You can also buy his book, Notes from the Boxing Underground! Paul is a full member of the Burger King Kids’ Club, a born iconoclast, and an ordained minister in the Universal Life Church.