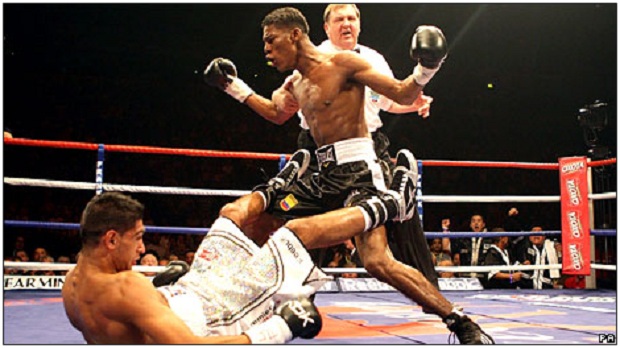 “It has made me realise you can’t get away with mistakes and it has given me a kick up the arse. Hopefully my next fight will be totally different. Maybe it was just meant to happen.’–Amir Khan

Sometimes you run across the perfect ring mugging and if ever there was perfection, it was when dangerous Colombian bomber Breidis Prescott 19-0 coming in) caught undefeated Amir Khan 18-0) cold on September 6, 2008 in Manchester, U.K. and bludgeoned him to the canvass in just 30 seconds. The assault was sudden, unexpected, and concussive. In short, it met all the requirements of a quintessential mugging and, for good measure, was also an upset.

The Bolton boxer was put down for the first time when hit by two Prescott lefts in quick succession. Khan managed to regain his feet but was struggling badly and should not—in my view– have been allowed to box on. In any case, after resuming the fight, the rampaging Prescott unleashed another crunching flurry and Khan went down and was counted out by Referee Terry O’Connor after 54 seconds. Enjoy: https://www.youtube.com/watch?v=cUW7gWi4vZ0

It was a first defeat for Khan, who won an Olympic silver medal at the 2004 Olympics. In another upset, he would be mugged again by Danny Garcia in 2012 in Las Vegas. Watch the highlights: https://www.youtube.com/watch?v=Jg8eZ3xlX3g